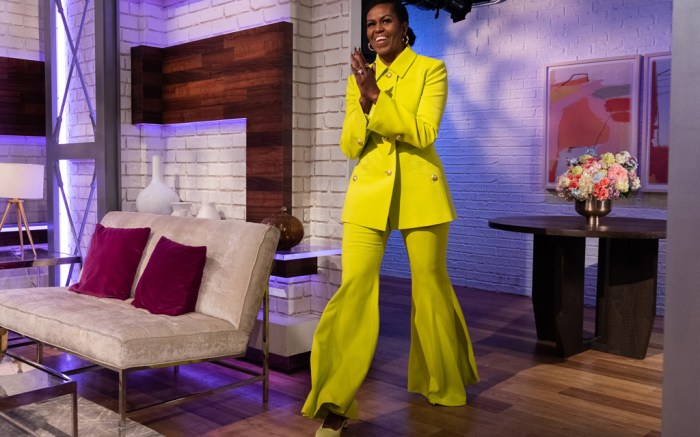 Michelle Obama has spent the past month on tour to promote her book, “The Light We Carry.” It’s the second tome from the former first lady (her first book, “Becoming,” released in 2018, after she and President Barack Obama left the White House). The circuit has included late night talk shows and sold-out venues across the country, where Obama has conversed with the likes of Oprah, Conan O’Brien, Tyler Perry, Hoda Kotb and other boldface-named friends.

The tour has also inevitably brought about another round of style moments for one of history’s most fashion-forward first ladies. This time, though, Obama raised the stakes even higher, not only redefining what constitutes professional dress and what women can and should wear in their later decades but also essentially turning the legacy of First Lady style completely on its head, even in hep post-White House era.

In retrospect, it may have all started with a pair of boots. Back in December 2018, when the former FLOTUS kicked off her “Becoming” tour, she appeared on the stage of Brooklyn’s Barclays Center (for a conversation with Sarah Jessica Parker) wearing a pair of glittery stretch thigh-high boots from Balenciaga. The fashion choice instantly gathered criticism for the boots’ $3,900 price tag. But as Obama explained to Parker on that stage, “Now, I’m free to do whatever.”

That post-White House philosophy seems to have expanded even further for the first lady in the years since she wore those sparkly boots. On the second book tour, more advanced fashion trends were fair game, from cargo pants and track suits to scarf tops, experimental denim and full-look leather. It was all pulled together with the help of Meredith Koop, her longtime stylist — and an assortment of heeled booties from Stuart Weitzman, which Obama has worn nearly a dozen times recently. The first lady also changed her hair to include braids, noting to interviewer Ellen DeGeneres in her Nov. 15 appearance that it was a style she wanted to wear while in the White House but felt pressure to keep her hair straight as Americans were “getting adjusted” to having a Black president.

Obama’s new book centers on holding steady and keeping confidence in times of uncertainty. So it’s no surprise that the first lady would sartorially correspond with looks equally as bold. Herewith, a rundown of 10 looks that have signaled Michelle Obama’s style transformation since she left the White House — and redefined the aesthetics of First Lady fashion along the way.

Obama wore a full look black leather jacket and trousers by Palmer Harding along with Stuart Weitzman studded boots and a braided bun while on tour in Atlanta on Dec. 2.

For her “Becoming” tour in 2018, Obama took the stage at the Barclays Center in Brooklyn with Sarah Jessica Parker wearing a pair of thigh-high Balenciaga boots. “They were just really cute,” she told Parker onstage. “I was like, ‘Those some nice boots!’”

For the inauguration of President Joe Biden in January 21, Obama chose a head-to-toe maroon look by designer Sergio Hudson. The wide  leg pants, sweater and matching overcoat and belt were the ultimate winter power ensemble.

4. A full denim look with braids

For her conversation with Ellen DeGeneres in Washington, D.C. to kick off her tour, Obama wore a denim set by Danish brand Ganni, paired with patent burgundy booties by Stuart Weitzman and a braided hair style. While in conversation with DeGeneres, the former first lady discussed the pressure while in the White House to keep her hair straight as Americans were “getting adjusted” to having a Black president.

5. A new brand of power suiting

Pantsuits have long been the power uniform for women in politics, but Obama proved that they can also be cool while keeping their power connotations. The former first lady wore a neon yellow suit by Proenza Schouler for her “Today” show appearance in November, paired with Anny Nord shoes heels and Jennifer Fisher and Sara Weinstock jewelry. During her time in the White House, Obama rarely wore a pantsuit, opting instead for A-line dresses and skirts, often paired with cardigans and ballet flats. Her suit appearance not only redefined her style norms, it gave a new dimension to the symbol of the pantsuit.

The former FLOTUS debuted perhaps her most carefree look yet when she stepped onstage in a Marine Serre dress, worn as a scarf style top, paired with wide leg Balmain jeans, another pair of Stuart Weitzman booties, hoop earrings by Elizabeth Hooper and Vhernier and Jennifer Fisher rings.

For the September 2022  unveiling of her White House portrait, Obama donned a ladylike pleated dress with Gianvito Rossi velvet pumps, a look that called back to her style during her years in the White House. But it was the portrait that made sartorial history:  Artist Sharon Sprung portrayed the first lady bare armed (an Obama style signature) in a pastel blue gown by Jason Wu.

For the Atlanta leg of her tour, Obama got sporty with a Fila jacket, worn with Roksana cargo pants and a Christy Rilling bodysuit, Stuart Weitzman booties and jewelry by Nina Runsdorf and Jennifer Fisher.

For the Toronto stop on her “Becoming” tour, Obama sported a crystal fringe suit by Area with Gianvito Rossi heels.