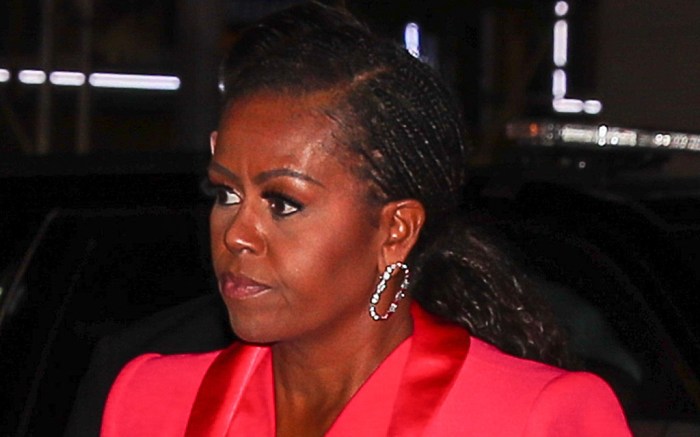 Michelle Obama made an eye-catching entrance at the Albie Awards afterparty last night at The Mark Hotel in New York City. Followed by an entourage of security guards, Obama wasn’t hard to spot given she was wearing a vibrant neon pink shade.

The former first lady was clad in a power suit that consisted of an oversized blazer which she kept open, layering the outerwear overtop with a pink button-down top tucked into her high-waisted pink trousers. Around her waist, Obama wore a matching cummerbund that further riffed on traditional men’s suiting.

The bright suit featured a silkier fabric on the lapels of her blazer, as well as down the sides of the attorney’s pant legs in singular stripes. Obama carried a pink quilted clutch and adorned her fingers with chunky silver jewelry that matched the diamond-studded silver on her ear lobes. The “Becoming” author wore her dark locks parted dramatically to one side, fixed into expressive braids down her back.

For footwear, the wife of former President of the United States Barack Obama opted for a little extra shine to her step. Her feet glimmered wherever she went thanks to the silver strappy sandals by Sophia Webster. The 3.75-inch heels were adorned with brilliant stacked crystals; they retail for $595 on Sophiawebster.com. Obama has often looked to the brand for high-profile occasions, including an engagement at a school in Vietnam.

When it comes down to shoes, Obama tends to gravitate towards bold and preppy shoe styles centering around whimsical patterns or colors. The podcast host often wears glamorous silhouettes by Sophia Webster, Jimmy Choo, Stuart Weitzman, Christopher John Rogers, and Balenciaga. Obama often incorporates affordable styles from a wide range of brands like Zara and Converse. When off-duty, she likely slips into sneakers, sandals and sharp flats.