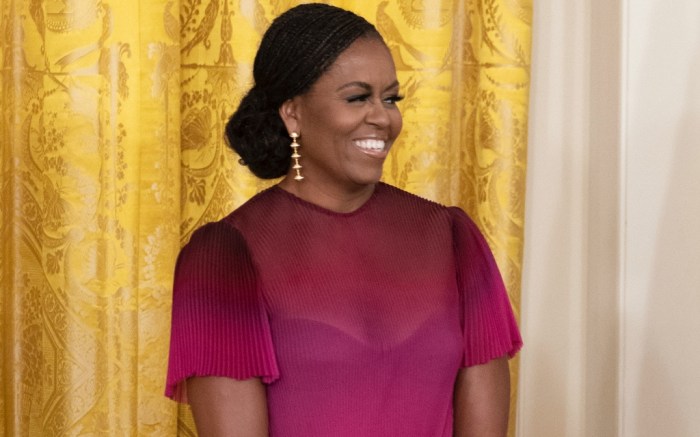 Michelle Obama popped in pink as she arrived at a taping for her Netflix series, “Waffles and Mochi” in New York City. The former first lady is joined by puppet pals on the show as they discover, cook and eat different foods from around the world.

Obama looked pretty in hot pink jumpsuit, embracing the Barbiecore trend while appearing on the set. The garment featured a high ruffled neckline and short sleeves. The piece also had a fitted bodice and wide pants leg.

The “Becoming” author styled her knotless braids in a low ponytail and opted for a soft eyeshadow with a glossy neutral pout. To place more emphasis on her look, Obama simply accessorized with a pair of diamond stud earrings.

Adding a glamorous touch to her ensemble, Obama completed her look with a pair of bejeweled ballet flats. The silhouette had a round toe and also featured a gold embellishment.

Obama tends to gravitate towards bold and preppy shoe styles. She often wears glamorous silhouettes by Jimmy Choo, Stuart Weitzman and Balenciaga. She will also incorporate affordable styles from brands like Zara and Converse. When off-duty, she will likely slip into sneakers, sandals and sharp flats.

Click through the gallery to see Obama’s best fashion moments.