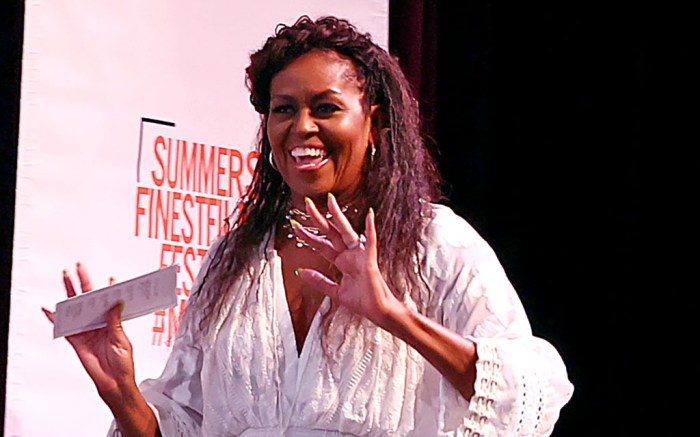 Michelle Obama made an impromptu arrival at the Martha’s Vineyard African American Film Festival on Aug. 5 in Edgartown, Mass., for the premiere of Netflix’s latest documentary, “Descendant.”

The former first lady, who was accompanied by her husband, the former president Barack Obama, arrived in a Hemant & Nandita’s Veda long dress. The summer-focused style had a light, angelic and airy feel with a silhouette that’s versatile enough for a more toned-down look with the ability to create a dressier appeal, such as Obama did.

Her gold accessories, including hoop earrings and a layered necklace, allowed the dress to convey a slightly formal approach without compromising its arrangement, which roots in a season of tranquility.

Its intricate pattern featured elements that intersect with one another to create a design that exudes an overall carefree nature. The connected delineations, such as its smocked center, ringed embellishments and floral embroideries across its hemline, channel the dress’ buoyant structure. It strays from a singular theme and illustrates spontaneity, drawing out its carefree and cheerful presentation.

For footwear, she opted for a pair of golden and brown thong sandals that coordinated with her outfit’s jewelry. Ideal for summer and warmer weather overall, the shoe style was an apt companion.