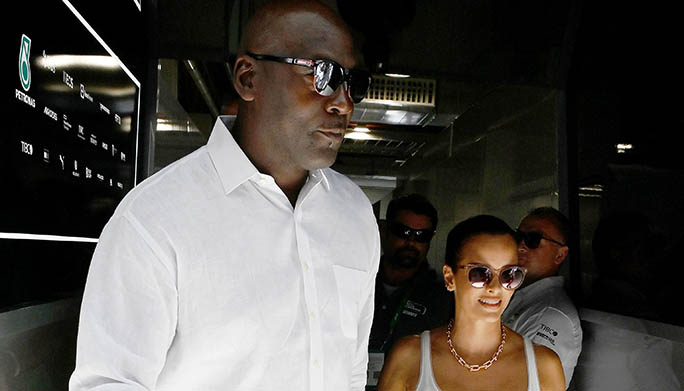 Michael Jordan was cool and casual as he attended the 2022 Formula One Grand Prix at Miami International Autodrome alongside his wife Yvette Prieto on Sunday. The NBA All-Star put his signature flair on a breezy outfit.

Jordan was spotted out under the sunny skies in a white button-down shirt. He paired the long-sleeve collared top with green linen pants. The basketball champion continued with a relaxed vibe by completing the spring ensemble with white sneakers and sleek black shades. The kicks had a thick outer sole and crisp white laces.

Prieto exuded chic glamour in a white tank top that she paired with baggy high-waist trousers, round frames and a cream handbag. She rounded things out with Bottega Veneta’s Mesh High Heel Sandals.The breathable shoes feature a mesh toe and a nearly 4-inch sculpted heel. She wrapped the extra-long straps around her ankles.

When it comes to style, Jordan is known for staying true to his personal vibe and refraining from trends. From his boxy tailoring – which redefined the ’80s power suit – to his snazzy golf vests and loud-and-proud tracksuits, MJ’s style is controversial and without a doubt influential. He’s the certified GOAT of footwear as retro Air Jordans remain some of the most fashionable shoe styles on and off the court.

See how high heels evolved through the years.