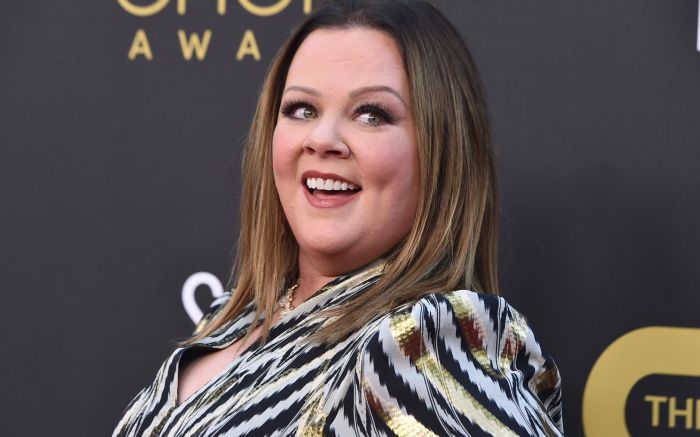 Melissa McCarthy arrived on the red carpet of the Critics’ Choice Awards yesterday in LA in an electrifying dress.

McCarthy’s gown was littered with gold. The dress featured a black, white and gold zigzag pattern with long sleeves; it was cinched with gold detailing that looked almost like a belt. The “Little Mermaid” actress surely looks comfy in the ensemble, keeping things slightly casual. The star wore gold jewelry around her neck, putting on a couple of bracelets and rings to tie everything together.

The “Bridesmaids” star’s makeup was slightly smokey, playing off of the black tones in the dress. Adding to the shine, McCarthy carried a rounded clutch with a sheen to it, adding a textural element to the ensemble. Keeping cozy, she slipped into silver slides, mixing her metals with the play on the gold. The slides featured a black bottom and a silver knot, allowing for the actress to show off her pedicure. The gold detailing throughout the look is a nice touch, rounding out the outfit with a common theme. The comfy shoe choice is a stellar one, making a case for comfort first.

The Critics’ Choice Awards honor the year’s top pictures and performances of film and television. This year’s event, hosted by Taye Diggs and Nicole Byer, will be broadcast from the Century Plaza Hotel in Los Angeles. Leading the film categories are “West Side Story” and “Belfast,” while the TV side is led by “Succession.” The Critics Choice acting categories are led by stars from most nominated projects, including Lady Gaga, Kristen Stewart, Will Smith, Ariana DeBose, Kirsten Dunst, and Andrew Garfield.