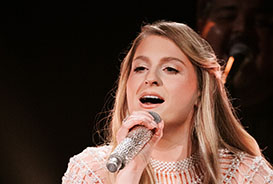 Megan Trainor was joined by fellow singer Teddy Swims to perform her new song “Bad For Me” on “The Late Late Show With James Corden.” The episode, which will air on Aug. 25, 2022, was accompanied by the arrival of two special guests Jason Momoa and Kristen Bell.

Standing side by side with Swims,  a choir surrounding her, Trainor wore a white sheer floor-length gown littered with groups of cascading feathers. Each feather was placed in a row just below the bodice down the skirt and sleeves, the textural element adding drama, depth, and movement to the garment.

The top half of the dress was adorned with a sort of cage made of pearls that was draped over the mom of one’s shoulders and décolletage. The angelic ensemble was accessorized sparingly with a sparkling statement ring, Trainor letting the eye-catching dress speak for itself.

The “Me Too” songstress’ shoes were not visible under her gown but Trainor seems to have some footwear favorites. Off duty, Trainor can be found wearing Sketchers, which she is an ambassador of, in multiple colors and styles. On stage, the television personality usually opts for sky-high platform sandal heels or classic pumps in head-turning prints and colorways.

Along with being the musical guest, Trainor also sat down and talked with Corden in an oversized neon green shirt dress with matching sandal heels and participated in a game entitled “Cell Phone Profile.”

The game saw Mamoa and Bell work alongside the singer to figure out which of the three star’s cellphones was being shown on a screen-based off of clues like recently listened to podcasts, or receipts from food orders. The heels Trainor wore while playing the game were thick with sturdy block heels that offered the singer a more comfortable wear time.

PHOTOS: See how much high heels have changed over decades of innovation.