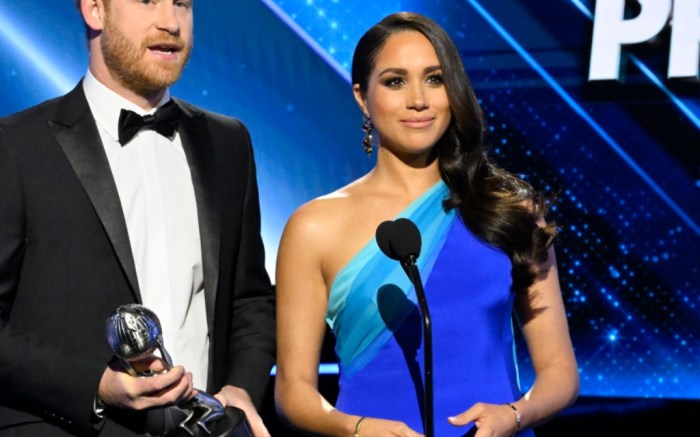 Meghan Markle and Prince Harry were presented the President’s Award at the NAACP Image Awards in Los Angeles last night for their work in social justice.

For the special occasion, Markle wore a striking blue one-shoulder gown with a thigh-high slit by New York-based Black designer Christopher John Rogers, who received the American Womenswear Designer of the Year award from the Council of Fashion Designers of America in 2021.

On her feet, the 40-year-old mother of two donned Aquazzura’s gold metallic leather Celeste sandals featuring shimmering straps that come together to form a knotted design at the toes. Referring to the strappy style as a “little Cinderella treat,” designer Edgardo Osorio calls the shoe “sparkling” and “fabulous” and capable of transforming any look. Markle also accessorized with a Cartier Love yellow gold bracelet and gold earrings.

With Prince Harry by her side, the Duchess of Sussex gave a short speech. “It’s inspiring to think about the legacy surrounding the Image Awards, which began shortly after the Civil Rights Act of 1964 and Voting Rights Act of 1965 was passed into law,” she said. “Today, we can continue that legacy by reestablishing federal voting protections in our country.” The couple also expressed their solidarity with the people of Ukraine.

Click through the gallery for more of Markle’s best shoe moments over the years.