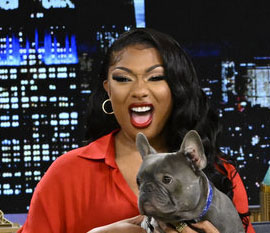 Megan Thee Stallion has been taking Japan by storm while performing at the Summer Sonic Festival in Osaka on Aug. 20. The recent posts to Megan’s Instagram see the star exploring the country while sharing some of her insane anime-inspired outfits.

Flexing her knowledge of Japanese culture, Megan wore a “Sailor Moon” style bodysuit for her performance inspired by the anime’s main character Usagi. From the styling to unmistakable space buns in her hair, the rapper really did the character justice, while making the iconic ensemble her own.

Adorned with a big red bow, the white bodysuit featured half a pleated skirt and collar that evoked that school girl vibe that every “Sailor Moon” character is known to wear.

Effectively elevating her look, Megan wore knee-high white go-go boots with a shiny finish and chunky platform heels. While the boots weren’t true to the character she was channeling, the touch is true to the “Hot Girl Coach” and her style preferences.

It’s no secret that the “Plan B” songstress is a huge fan of anime. Megan has long since meshed her love of fashion with her love of the Japanese art form evident in her “My Hero Academia” inspired Paper cover, to her recent outfits influenced by the “Jojo’s Bizarre Adventure” franchise.

Including the platforms, the Grammy award-winning star wore while in the land of the rising sun, Megan often makes bold shoe statements. She often thrives in sharp pumps, platform sandals and heeled boots from a range of top brands, including Weitzman, Christian Louboutin and Jimmy Choo on the red carpet. Off stage, she also wears colorful sneakers by brands including Giuseppe Zanotti. Aside from wearing bold shoes, she’s also starred in campaigns for Coach, Puma and Nike, and launched a collaborative line with Fashion Nova in 2021.