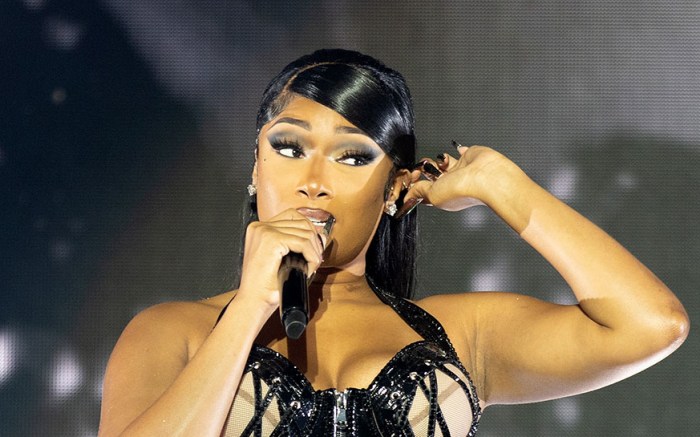 Megan Thee Stallion took over the stage at day one of the Reading Festival 2022 in Reading, England on Friday. The well-dressed rapper was joined by recognizable names like Glass Animals, All Time Low, and Wallows. The three-day festival will also see acts from Charli XCX, Arctic Monkeys, Bastille, and The 1975.

Performing hits like “Simon Says” and “WAP” the “Hot Girl Coach” blitzed through a hefty setlist in a BDSM-inspired black bodysuit. The shiny suit had thick shoulder straps and a zip up corseted waist that brought the bodysuit inwards. The one piece also featured faux cutouts made of a nude mesh fabric that offered the star the illusion of risk without the exposure.

While Megan’s shoes aren’t visible in these images, the Revlon global ambassador often makes bold shoe statements. She often thrives in sharp pumps, platform sandals and heeled boots from a range of top brands, including Stuart Weitzman, Christian Louboutin and Jimmy Choo on the red carpet. Off stage, Megan also wears colorful sneakers by brands including Giuseppe Zanotti. Aside from wearing bold shoes, she’s also starred in multiple campaigns for Coach, Puma and Nike, and launched a collaborative line with Fashion Nova in 2021.

Hyping up her “Hotties” live is an arduous task for sure. Often, Megan can be found wearing intricate bodysuits during her in person performances, the dressing allowing her to jump, twerk, and rap to her hearts content.

Only a few days ago, the “Body” rapper was in Japan performing for Summer Sonic Festival in Osaka in another bodysuit.  Flexing her knowledge of Japanese culture, Megan wore a “Sailor Moon” style bodysuit for her performance inspired by the anime’s main character Usagi. From the styling to unmistakable space buns in her hair, the rapper really did the character justice, while making the iconic ensemble her own.