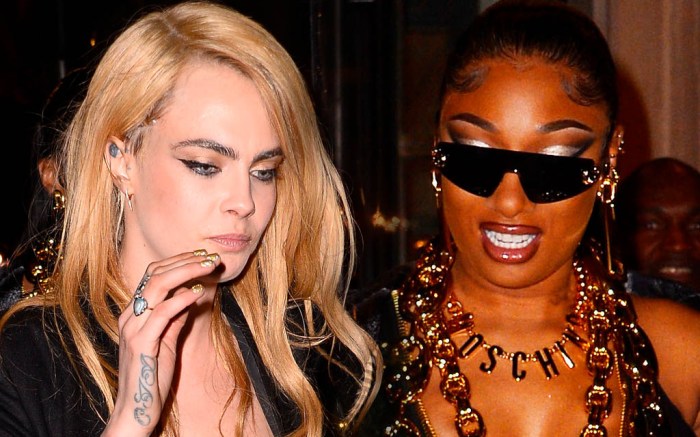 Days after the 2022 Met Gala, we are still getting snippets from the event itself and the after parties — including footage of Cara Delevingne and Megan Thee Stallion dancing together. The self-proclaimed Hot Girl and FN cover star were spotted twerking together at Cardi B’s after-party in New York City on Monday.

#MeganTheeStallion LIVING LIFE at a #Metgala after party

Both Megan and Delevingne made a fashionable statement at the shindig. Megan served a monochromatic moment in a low-cut mini dress by Moschino. She teamed the short frock with a matching leather jacket that was also designed by Italian luxury fashion house.

The Grammy Award-winning rapper took her look to another level with a slew of gold jewels including, chunky layered necklaces and a Moschino chain belt. The entertainer also added futuristic shades, which helped to show off her metallic eyeshadow and smoky wing. Megan completed her look with Versace’s Medusa gold chain sandals. The high heels featured a wide chain strap across the toe and around the ankle. The statement silhouette also included a square outer sole and a black flared heel.

Delevingne went edgy for the outing, wearing a black ankle-length trench coat over a silver sequin romper. The strapless sparkling garment was complete with a thin black belt that wrapped around her waist and boy shorts. The model rounded out her look with black combat boots, a wise choice for dancing the night away for their stability.

The lively dance racked up more than 1 million views on social media channels.

The 2022 Met Gala’s theme was “In America: An Anthology of Fashion,” exploring the foundations of American fashion — specifically, identifiers of American style and individual designers. The exhibit included 100 garments by independent designers and dressmakers from the 1800s to the mid-late 1900s in the Museum’s American Wing period rooms. There will also be “freeze frames” of film vignettes in each room, highlighting the aesthetics of eight different film directors: Janicza Bravo, Sofia Coppola, Julie Dash, Tom Ford, Regina King, Martin Scorsese, Autumn de Wilde and Chloé Zhao. Supported by Instagram and Condé Nast, the event raises funding for The Costume Institute’s exhibitions and future improvements. The exhibit will be open to the public starting on May 7, and — along with Part 1, which opened last September — close on Sept. 5, 2022.