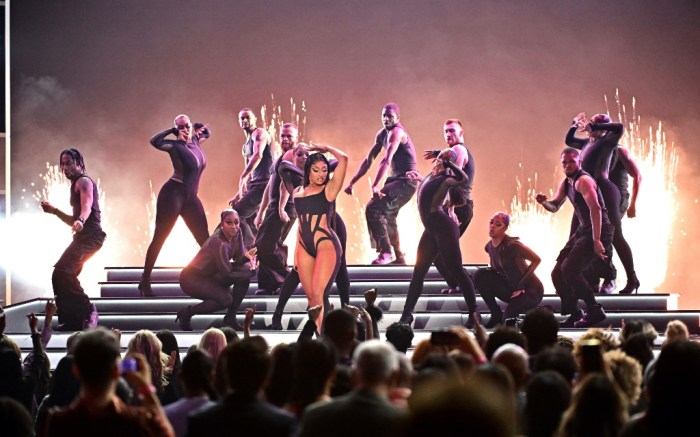 The “Body” singer took the stage by storm in a slick, slim-fitting bodysuit. The black one-piece featured thin top straps and numerous geometric cutouts, creating the illusion of shadowy lines across the singer’s body. An equally strappy back thong silhouette and long side straps completed her ensemble. Adding to her ensemble’s drama were dancers in sleek black bodysuits, leotards and trousers, plus fire displays shooting from the stage.

When it came to footwear, the “hot girl coach” boosted her look in a pair of black ankle boots. The lace-up style included ridged soles for added traction, plus slightly pointed toes and leather uppers. The shoes streamlined Megan’s look from its’ dark color palette, while still allowing her to dance and move onstage more easily. The style was a sharp departure from her initial footwear of choice while arriving on the red carpet: a pair of sharp open-toed stiletto heels.