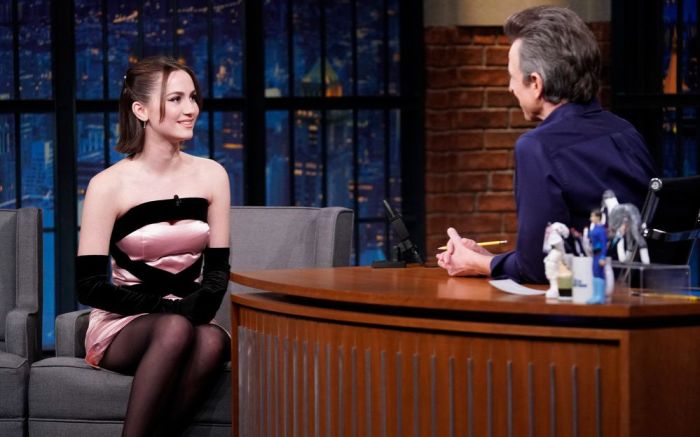 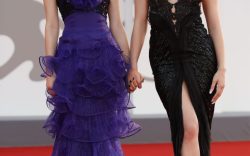 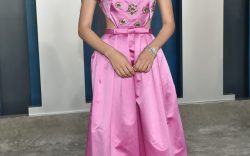 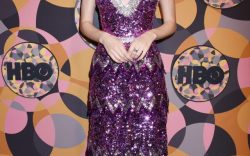 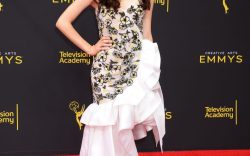 Maude Apatow made a fashionable appearance on the “Late Show With Seth Meyers” on Thursday night. The actress stopped by the talk show to discuss the series finale of “Euphoria,” which premieres on Sunday, on HBO.

Fans of the series know that Apatow plays Lexi in the hit teen drama series.

The starlet also spoke about her obsession with “90 Day Fiancé,” her love for theater and even recalled ripping out her tooth for a role when she was young. “I did like a gold rush day and I wanted to look like a minor, so I ripped out my tooth. I think I was nine. My parents definitely thought something was wrong with me,” Apatow said.

The daughter of Leslie Mann and Judd Apatow stepped out in a stylish and chic ensemble. Apatow donned a black and pink satin dress for the occasion. The strapless garment was outlined with black suede fabric at the top and in the center. She complemented her frock with sheer tights and long black suede gloves.

The “King of Staten Island” star finished off her look with soft glam and styled her brunette locs in a half up, half down style. She flipped the ends up and let two strands of her bangs drape on the sides of her face.

As for footwear, Apatow tied her look together with black platform pumps. The sky-high silhouette included a thin 7-inch heel, a huge platform sole, and a thin ankle strap.

When it comes to fashion, the “This is 40” actress tends to step out in styles that are classic and feminine. Her shoes follow a similar note, varying between styles like platform sandals, versatile pumps and sharp ankle boots from brands like Versace and Doc Martens.