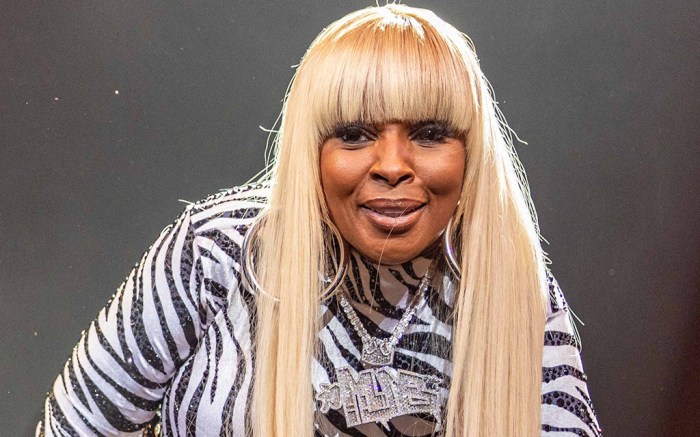 Mary J. Blige performed in Chicago for her “Good Morning Gorgeous Tour” at United Center on Sept. 25. The powerhouse singer made her way to the stage during the lengthy concert where she danced and sang her heart out wearing a bold animal print ensemble with coordinating footwear.

The musical artist served a fierce look for her fans in Illinois, her outfit consisting of a rhinestoned black and white zebra printed bodysuit. The high neck, long sleeve style silhouette was defined and brought inwards with help from a black boned corset fitted with garters and silver hardware like chains, grommets, and zippers.

The “Family Affair” songstress wore plenty of bling, including a gold and diamond chain necklace with a large flashy pendant. The outfit resembles something fellow performer and famed rapper Nicki Minaj would have worn back in 2014, Blige’s blunt bang blond locks furthering that narrative.

Blige danced like a pro, in heels no less, the 51-year-old clad in knee-high zebra print boots to match her outfit up top. The shoes were a slouchy style with thick and short black block heels that offered Blige more comfort than something much taller and with a more severe arch. It seems that the “Queen of Hip-Hop Soul” has an affinity for knee-high styles. During her performance at Florida Funk Fest in Orlando, Blige stepped into gold Paris Texas boots in the same style.

The “Respect” actress’ next stop on her tour is Birmingham Alabama. The impressive spectacle will take place until Oct. 29 in Atlantic City New Jersey.