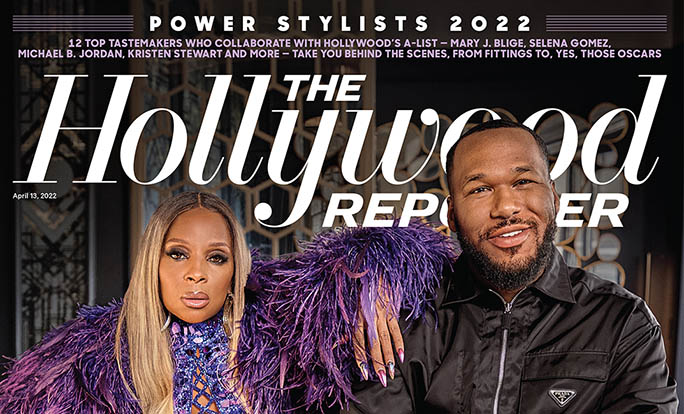 Mary J. Blige brought her bold sense of style and signature thigh-high boots to The Hollywood Reporter’s 2022 “Power Stylist” issue, which candidly captures the top celebrity stylists of the year and their A-list clientele.

On the cover, the Queen of Hip Hop and Soul posed alongside her stylist Jason Rembert in a sparkly purple metallic outfit, which Rembert revealed was the original option for her 2022 Super Bowl performance. The ensemble consisted of a lace-up crop top and matching high-waist boy shorts.

“It was truly a once-in-a-lifetime career moment. I submitted around 40 sketches to Mary in November, and we went with Dundas. But, two weeks before the show, Mary reached out and wanted to do white instead. I thought about it and agreed — white is synonymous with MJB. If you were to look back at her red carpet moments and videos, her “Share My World” era, she wore mostly shades of white. It made sense to bring that color back with this new chapter,” Rembert said in the article.

To take things up a notch, she teamed her co-ord with an oversized feathered coat, which featured a long dramatic train. As for footwear, the R&B superstar added a slick edge by slipping into her favorite shoe style, a pair of thigh-high boots. The silhouette was embellished with sequins and had a sharp triangular pointed toe.

In the interview, Blige also shared her admiration for Rembert and how they manage to bring their ideas to life.

“Jason really listens to what I need and love … he has his own perspective, but he never comes with ideas that don’t feel like me. He takes my vision and amplifies it,” Blige explained.

The New York City-based stylist and designer, who runs his own women’s label, Aliétte, met Blige four years ago when he worked with her for press for her “Strength of a Woman” album.

“It is exciting to work with someone whose brand identity has been so relevant for so many decades and is still at the top of their game,” Rembert said in the interview.

THR profiled some of Hollywood’s most prominent stylists and their clients, including Kate Young and Selena Gomez, Jason Bolden and Michael B. Jordan, Tara Swennen and Kristen Stewart, and Law Roach, who was named Stylist of the Year, and Venus Williams. The interview covers fashion secrets, the fantasy of celebrity styling and what it’s like dressing up their superstar talents.

See more of Mary J. Blige’s style through the years.