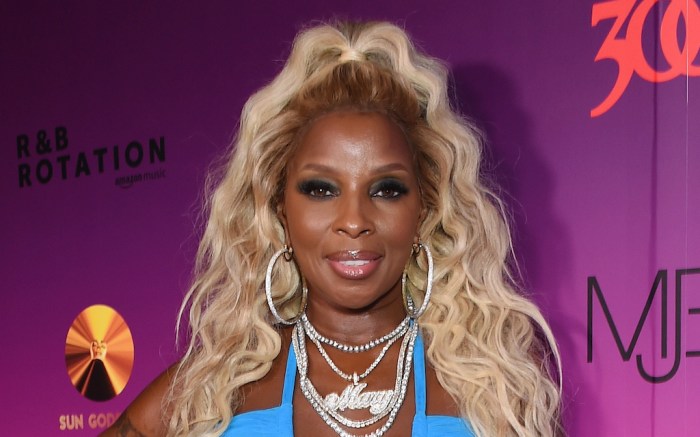 Mary J. Blige stepped out for a night courtside at Brooklyn’s Barclays Center yesterday, and she wore her best Brooklyn-glam for the occasion. The 51-year-old star, alongside Misa Hylton, attended Game 3 of the playoffs between the Brooklyn Nets and the Boston Celtics, turning some serious looks for the occasion.

@MaryJBlige with the fly boots on 🙌🏾 about to go Monet Tejada on Kyrie like if only Zeke survived and got drafted…#PowerBookII 😆 #Nets https://t.co/wAoflAwzFT

To sit courtside at the game, Blige wore a black satin bomber over a simple white tee, pairing the look with tight-fitting light-washed jeans. While the look was courtside-casual, Blige topped it off with show-stopping denim patchwork knee-high boots by Dolce & Gabbana. The “Cardinale Patchwork” shoes feature a 4-inch stiletto heel and intense denim detailing like pockets, seams, belt loops, studs and more. The designer boots retail for $1,645 and are available on Bloomingdales.com.

Blige, who was famously born in the Bronx and grew up in Yonkers, was predictably rooting on the Brooklyn Nets. Other stars in attendance included Trevor Noah, Spike Lee, Gayle King and Questlove. The Nets, who are in a playoff series against the Boston Celtics, lost the game 109-103, though Blige tried her best to inspire a win. A clip gone viral posted on Twitter shows the star yelling at Nets point guard Kyrie Irving to “step it up.”

Plenty of stars are in Brooklyn for Celtics-Nets ⭐️ pic.twitter.com/y4e6ybMxQ6

Blige appears to have an affinity for incredibly tall blue heeled boots as of late. She wore a pair of glittery light blue knee-high stilleto boots to her album premiere party on Feb. 11, then wore a pair of dark blue thigh-high stiletto boots to promote the same album less than a month later on April 4.

See more of Blige’s style through the years.

Step up your style in boots.

To Buy: Jessica Simpson Anitah Over The Knee Boot, $80.