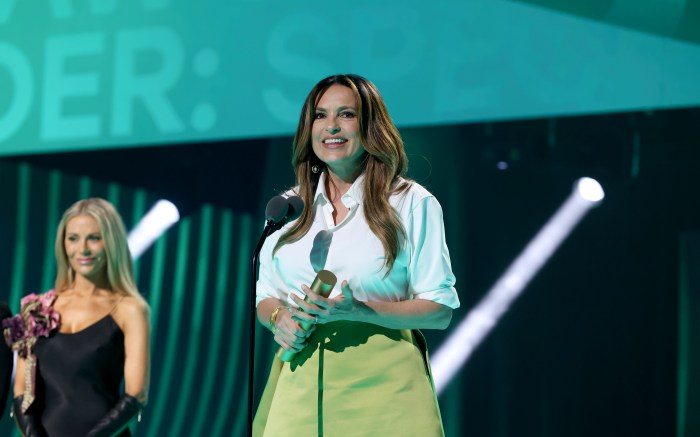 Mariska Hargitay was a vision as she attended the People’s Choice Awards in Santa Monica, Calif. on Tuesday night. The actress accepted the award for People’s Drama TV Star for her work on the hit crime series “Law & Order.”

The Emmy-winning actress wore a white Theory button-down top with the sleeves rolled up halfway. The star piece of the look was the lime green Emilia Wickstead satin skirt that had a dramatic train, cascading down the red carpet. The skirt is from Wickstead’s fall 2022 collection.

To accessorize, Hargitay opted for gold jewelry that featured a sparkling ring, a bracelet cuff and a pair of drop earrings. She added a pearl-embellished clutch to the look.

The director completed the look with a pair of gold metallic leather Prada sandals. The peep-toe heels were decorated with the brand’s iconic enameled metal triangle logo. The ankle strap of the sandals supported the towering length brought by the 5-inch block heel. The metallic platforms are from Prada’s spring 2021 collection.

Hargitay’s glowing look was put together by LA-based styling duo Meg Chapman and Jordan LaValle. The two have also created looks for other stars like Alyssa Milano.

The actress kept her caramel brown hair in a voluminous blowout style that complemented her minimal makeup that featured a deep coral lip. Her subtle look was created by hairstylist Chris McMillan and makeup artist Fiona Stiles. The beauty duo has also worked with stars like Jennifer Aniston, Lily Collins, and Kate Hudson.