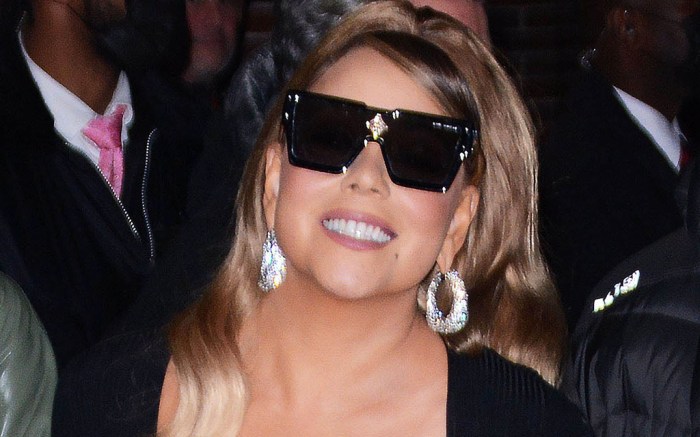 Mariah Carey was seen leaving the set of “The Late Show With Stephen Colbert” yesterday night in New York, making a glamorous departure in a black gown and sparkling pumps.

The pop singer’s look was based around a long-sleeved black maxi dress with a plunging lace-trimmed neckline made of a moveable stretch fabric. The garment was belted to bring the waist inwards, defining Carey’s silhouette.

The dress also featured a short side slit that spotlighted Carey’s glamorous footwear. Further amplifying the look, the “All I Want For Christmas Is You” songstress shrouded her features with large black rectangular shades and adorned her ears with large dazzling hoops.

The shimmering footwear was set atop thin stilettos of 4 inches in height, with triangular bottoms that created a more comfortable experience for the pop icon.

Carey’s penchant for glamour remains unmatched. The mom of two often opts for stiletto-heeled platform sandals and pointed-toe pumps on and off the red carpet from top brands, including Aquazzura, Sophia Webster, Christian Louboutin, and Jimmy Choo. These often include statement-making elements like metallic tones, crystals, and bright colors. Aside from her heels, Carey also favors cozy Ugg boots while off-duty. Carey also launched an extensive collection of footwear with HSN in 2010.

PHOTOS: Take a look at some of Mariah Carey’s most glamorous concert looks.