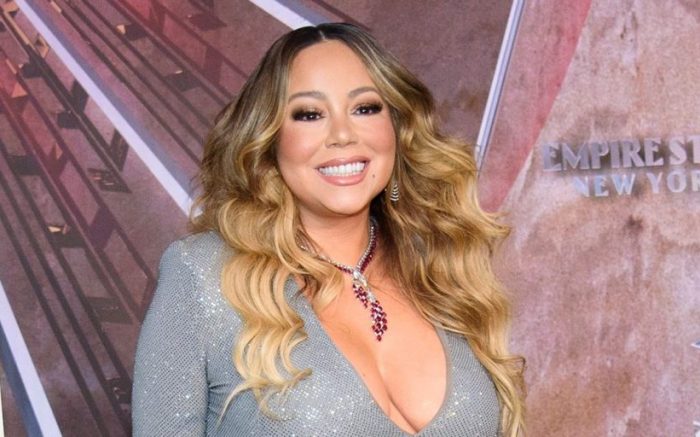 Mariah Carey uploaded a photo on Instagram posing alongside her daughter Monroe Cannon, whom she shares with Nick Cannon. “#Butterfly25 with my Roe Roe and getting ready for #GlobalCitizen,” Carey captioned the photo along with a blue butterfly emoji.

The new photo sees the mother-daughter duo posing in causal cozy pieces. Carey sported a cream long-sleeve shirt with her “Butterfly” anniversary sweatpants. The comfortable bottoms are emblazoned with the album’s title at the back and includes brown and cream butterflies near the calf.

Giving her look a glamorous touch, the “Shake It Off” hitmaker parted her hair in the middle and styled it in loose curls. Taking a break from her usual towering heels Carey decided to go barefoot to commemorate the milestone. Monroe followed in her mother’s footsteps and donned a black 25th anniversary “Butterfly” sweatshirt with printed pajama pants.

Carey just hit a monumental milestone. The certified “Songbird Supreme” is celebrating the 25th anniversary of her “Butterly” album. The 25th anniversary will include a deluxe reissue of the 1997 LP with eight new bonus tracks, music videos, a new documentary on the making of the iconic “Honey” visual, a special vinyl release of “Honey (The Remixes)” and a Butterfly-themed merch collection.

When it comes to fashion, Carey is known for having an extravagant fashion sense, while also wearing pieces that are modern and classic. For years we’ve seen her in dramatic ball gowns and other flouncy dresses. She also favors slinky and edgy garments that are both chic and flirty, as well as slouchy designer T-shirts that speak to her brevity for staying up on the latest fashion trends. As for footwear, the dazzling diva has an affinity for height-staggering heels and stylish stilettos.

PHOTOS: Click through the gallery to see Mariah Carey’s most glamorous outfits.