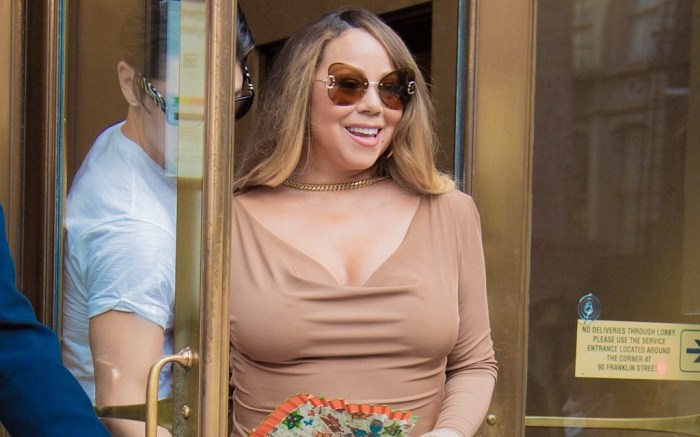 The “All I Want for Christmas Is You” songstress wore brown and tan cheetah print pajamas that consisted of a long sleeved top and coordinating flared oversized trousers. Carey held a gold chain necklace and wore dangling chandelier-esque silver earrings that swayed as she moved.

Although her shoes weren’t visible, the singer usually gravitates towards footwear favorites. Carey’s penchant for glamour remains unmatched. The mom of two often opts to wear stiletto-heeled platform sandals and pumps on and off the red carpet from top brands, including Aquazzura, Sophia Webster, Christian Louboutin and Jimmy Choo.

These often include statement-making elements like metallic tones, crystals and bright colors. Aside from her heels, Carey also favors Ugg boots while off-duty. The singer’s love for shoes runs deep, as she owns an extensive collection and launched her own namesake line with HSN in 2010.

Standing beside her, the “Stranger Things” actress wore a black and white oversized hoodie with a tee underneath. Clothed casually, the Florence owner wore brown fitted jeans and accessorized with oversized purple glasses and small gold hoops. Brown wore her blond tresses up in a golden claw clip for good measure.

The young star’s shoes were also not visible, but she often wears sandals and sneakers on casual occasions.

The video comes at a perfect time, given that it is the 25th anniversary Carey’s “Butterfly” album, on which the song “Honey” is featured. In fact, to celebrate the occasion, Carey teamed up with accessories brand Chopard to create a butterfly themed jewelry collection.

PHOTOS:Check out some of Mariah Carey’s most glamorous performance outfits.