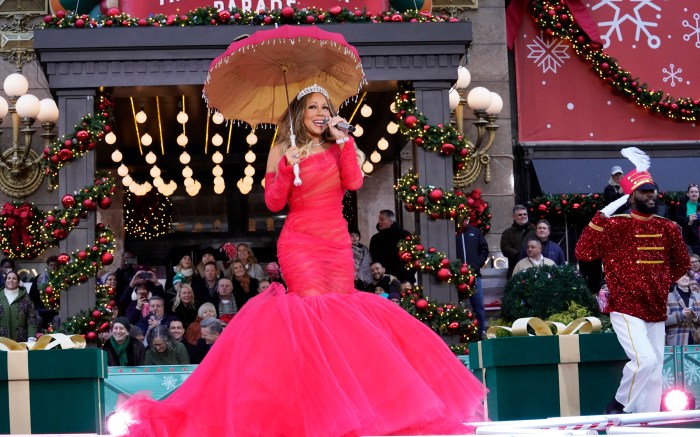 Mariah Carey closed the Macy’s Thanksgiving Parade in New York City on Nov. 24 in a custom red dress alongside her 11-year-old twins, Moroccan and Monroe.

The queen of Christmas captioned a photo to celebrate the occasion saying, “Happy Thanksgiving!!!🍁 Grateful and so proud of my beautiful kids Roc and Roe, grateful for the lambily and for the precious moments in life. ❤️❤️❤️ Now it’s reaaaallly time!!! 🎄🎅🏼.”

The award-winning singer was all dolled up in a custom Christian Siriano gown designed with an off-the-shoulder moment, sheer ruching and a voluminous mermaid tulle skirt. Taking to Instagram, Siriano revealed, “Mariah said don’t worry if the stage isn’t big enough for the dress we will just make it bigger!” Indeed, the skirt stretched past the intersecting edges of her star-shaped stage.

The performance went viral on Twitter as observers commented that Carey’s mouth didn’t align with the pre-recorded vocals for “All I Want for Christmas Is You.” Due to technical restraints, the Macy’s Thanksgiving Day Parade performs all have to lip sync to their songs as the moving floats are not equipped for live singing.

.@MariahCarey opens for Santa Claus at the @Macys' Thanksgiving Day Parade with a killer performance of "All I Want For Christmas Is You"! 🎄pic.twitter.com/trXpKaJAkj

Her jewelry that included over 80 carats of Hamilton Jewelers’ 110-Year Anniversary Capsule Collection diamonds; they only brought more life to her shimmering tiara. Carey’s other accessories included a coordinated parasol to complete the striking red look.

The designer transformed the original one-of-a-kind sketch of the dress into an unframed holiday card signed by Christian Siriano.

Carey’s heels were hidden under the skirt, but she was seen in a pair of sky-high block heeled platforms. And she’s known to don a pair of platforms on any occasion, whether it’s while she’s at home watching “The Crown” on Netflix or stopping by “The Tonight Show Starring Jimmy Fallon” to read her book, “The Christmas Princess.”

Carey’s twins were equally dressed to the nines. Moroccan was decked out in a red sweatshirt with black pants and a gold chain. Monroe kept it whimsical in a fairytale-like white tutu. She even threw on a tiara like her mom and took it another step further with fairy wings.

PHOTOS: The Macy’s Thanksgiving Day Parade Through the Years, From 1929–2018