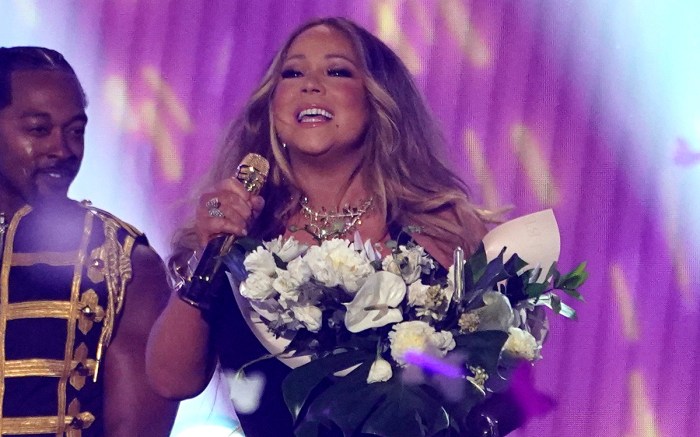 Latto delivered one of the most memorable performances of the night at the 2022 BET Awards. The rapper surprised the audience as she brought out Ol’ Dirty Bastard and Mariah Carey to sing the remix of Latto’s chart topping hit, “Big Energy.”

After delivering the first half of the single, however, Latto deferred to a silhouette positioned center stage — which then evaporated into dozens of butterflies. Sure enough, Carey was on hand for a surprise reveal, performing part of “Fantasy” and thoroughly bringing down the house at the Microsoft Theater in Los Angeles on Sunday night.

The certified “Songbird Supreme” certainly brought big energy to the stage in a gorgeous black gown by Dolce & Gabbana that featured a plunging V-neckline with wide straps and sweeping train. The garment also had a thigh-high slit that was outlined with a sparkling gold trimming.

Carey added more glitz and glam to her look with a statement necklace, chunky bracelets and a diamond butterfly ring. The award-winning singer parted her hair in the middle and styled it in sultry soft waves. To further elevate the moment, she completed her look with gold strappy sandals that were also by Dolce & Gabbana. The silhouette laced up around her calves and sat on a high stiletto heel.