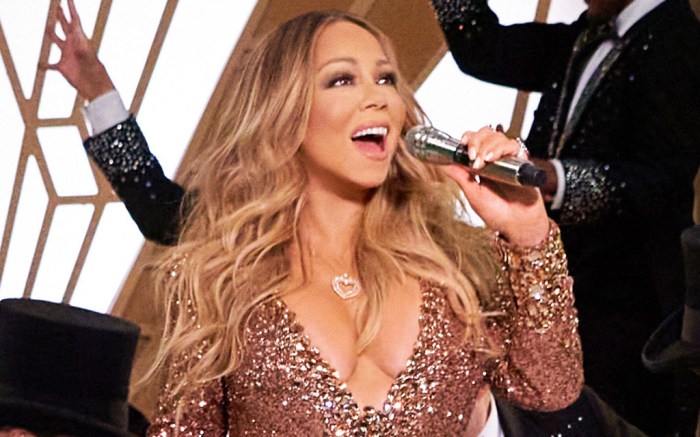 Now that Halloween is officially over, the holiday festivities can commence. Just hours after spooky season came to a close, Mariah Carey came through with a seasonal Instagram post to let everyone know what time it is.

On Tuesday, the certified “Songbird Supreme” uploaded a Halloween-themed video, which begins in black and white with Carey on a stationary bike, dressed as a witch, and surrounded by jack o’lanterns and bats. Then, suddenly it transitions into the singer’s very own winter wonderland while her hit song, “All I Want For Christmas” plays in the background.

Carey made sure to dress the part for the announcement. For the Halloween portion of the video, the five-time Grammy Award-winning singer wore a plunging latex jumpsuit with a witch hat and dark makeup. For footwear, she coordinated her ensemble with thigh-high boots. The silhouette laced all the way up to the top and featured an almond-shaped toe with a thin stiletto heel.

For the Christmas scene, Carey swapped her witch attire for a red jumpsuit that was decorated with white fluffy details on the neckline and on the cuffs. The powerhouse entertainer tied her outfit together with a thick black belt that wrapped tightly around her waist and matching platform ankle boots.

Carey is known for having an extravagant fashion sense, while also wearing pieces that are modern and classic. For years we’ve seen her in dramatic ball gowns and other flouncy dresses. She also favors slinky and edgy garments that are both chic and flirty, as well as slouchy designer T-shirts that speak to her brevity for staying up on the latest fashion trends. As for footwear, the dazzling diva has an affinity for height-staggering heels and stylish stilettos.

PHOTOS: Click through the gallery to see Mariah Carey’s most glamorous outfits.