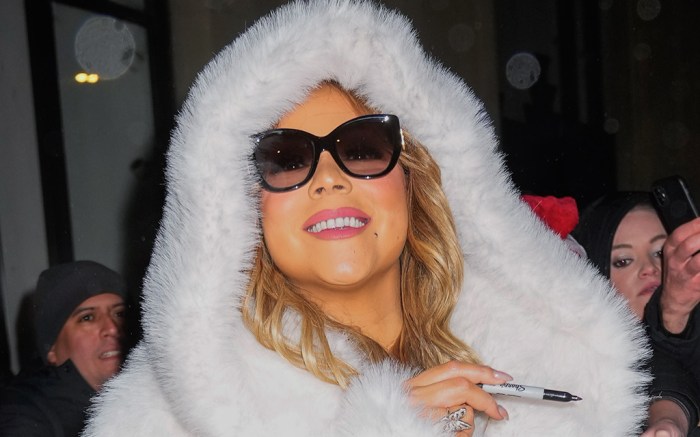 Mariah Carey was photographed greeting fans and signing autographs in New York yesterday night. The hitmaker was heading to Madison Square Garden for her “Merry Christmas to All” concert. Carey dressed up in a lux faux-fur coat with striking leather boots.

The “All I Want For Christmas Is You” singer brought the drama dressed in a sparkling black slouchy blouse which she wore with fitted black leather pants. Overtop it all, Carey snuggled up in an oversized white faux-fur hooded coat.

The style is endlessly glamorous and sleek, something Carey is famously known for. The songwriter punctuated her look with large black sunnies and styled her long blond locks down in curls, the rest of her hair tucked under her hood.

When it came down to footwear, Carey sported black leather Christian Louboutin boots with sharp pointed toes, classic blood-red soles and an appealing glossy finish. The designer boots’ slim fit and thick platform soles transitioned into sharp stiletto heels that ranged around 4 to 5 inches in height. The heel height certainly made the performer taller while streamlining her silhouette, thanks to the angular arch and elongated toes.

Carey’s penchant for glamour remains unmatched. The mom of two often opts for stiletto-heeled platform sandals and pointed-toe pumps on and off the red carpet from top brands, including Aquazzura, Sophia Webster, Christian Louboutin, and Jimmy Choo. These often include statement-making elements like metallic tones, crystals, and bright colors. Aside from her heels, Carey also favors cozy Ugg boots while off-duty. Carey also launched an extensive collection of footwear with HSN in 2010.

PHOTOS: Take a look at some of Mariah Carey’s most glamorous concert looks.