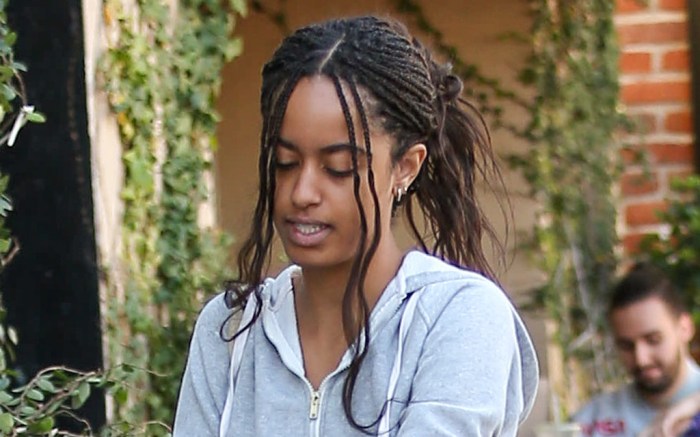 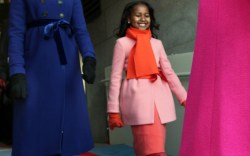 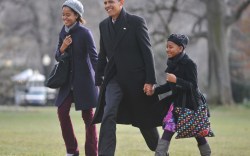 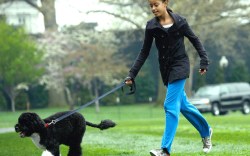 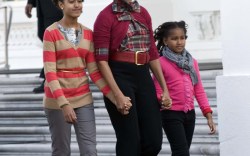 While grabbing coffee with a friend, the former first daughter wore a pair of beige pants. The wide-leg style was paired with a light gray hoodie, which included a drawstring hood and from zipper. Obama’s look was comfortably complete with stud earrings and a canvas tote bag.

When it came to shoes, the 23-year-old opted for a pair of Nike sneakers. The chunky white and beige style featured mesh and suede uppers, as well as a lace-up silhouette and red Nike Swoosh logos. The footwear added a sporty edge to Obama’s look, particularly through its thick rubber soles.

Obama’s sneakers are an easy way to add a sporty vibe to any look. The Harvard student’s pair featured thick soles and a paneled texture, which can bring a distinctly relaxed nature to anyone’s shoe wardrobe. Aside from Obama, stars like Elsa Hosk, Rita Ora and Alessandra Ambrosio have also been spotted in sporty sneakers by Adidas, Air Jordan and New Balance in recent weeks.

Since her father Barack Obama was first elected President of the United States in 2008, Malia has literally grown up in the public eye. The former Weinstein Company intern’s style, which has grown more laidback over the years, often features sneakers by Converse, Reebok and K-Swiss. For day-to-day wear, she’s also donned work and ankle boots by Dr. Martens, Timberland and 3.1 Phillip Lim. In warmer months, Obama can be seen in versatile low-heeled, wedge and flat sandals from brands like Jerusalem.