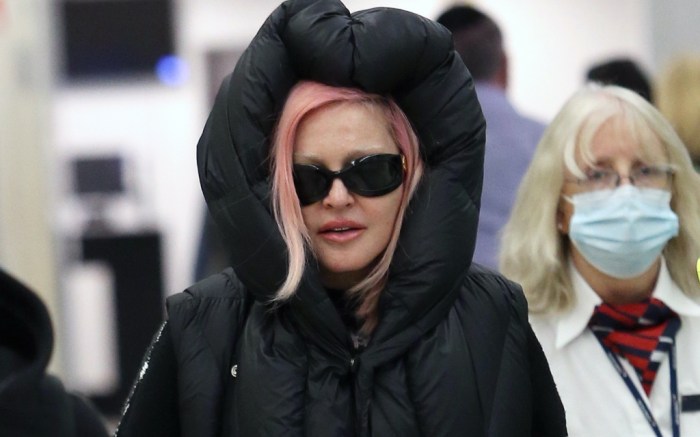 Madonna bundled up in a recent outing. The Grammy-winning singer was spotted at the JFK airport in New York City earlier today, in cozy style.

She wore an oversized black puffer vest with a hood over her head. The puffer jacket reached her ankles and covered a black and white sweater with several different knitted detailing on the sleeves. She slipped into black baggy pants with white stitching adding to the cozy style. Madonna also added black sunglasses to the look.

The “Material Girl” singer rounded out her look with the Balenciaga x Crocs clogs. As part of Balenciaga’s spring 2022 collection, the chunky black rubber clogs featured rounded toes and perforated uppers with ridged platform soles. Completing the set were silver nail head-shaped accents and “Balenciaga” nameplates for a grungy edge.

Madonna is renowned for her edgy and groundbreaking personal style, both in her own right and as a muse for designers including Tom Ford, Jeremy Scott, and Jean Paul Gaultier. Her footwear follows an equally sleek and edgy route, often consisting of pointed-toe and platform pumps and boots on the red carpet from brands including Chanel and Christian Louboutin.

Off-duty, the “Vogue” can be seen in a range of boots and sneakers from brands including Nike and Puma. A frequent Met Gala attendee, Madonna is known for making bold fashion statements and has also launched her own fashion projects over the years. These have included an M by Madonna H&M collection, the MDG sunglasses line with Dolce & Gabbana and a fashion line, Truth or Dare — with shoes created in partnership with Aldo, plus many more through her career.

PHOTOS: Discover Madonna’s style evolution over the years in the gallery.