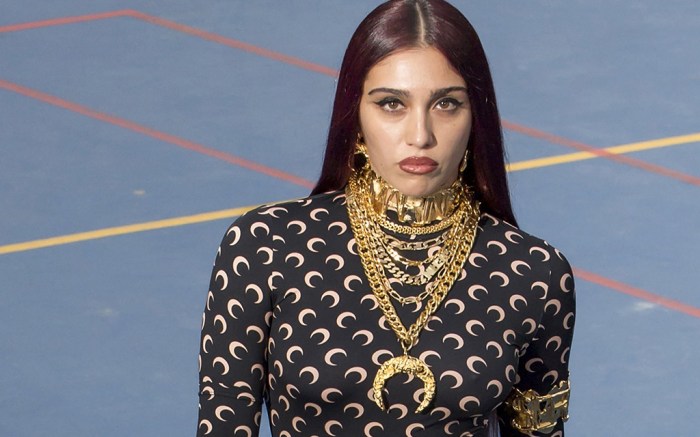 Since Serre was once a competitive tennis player, she dedicated this collection, which is called State of Soul, to different sporting events. The runway show was even hosted at a track and field stadium that’s located on the outskirts of Paris. For the models, Serre used the opportunity to feature some athletes, including a rugby player, a soccer player, a fencer and a Paralympic gold medalist. Athletes weren’t the only models to hit the runway, though — multiple celebrities also showed off some looks, including Madonna’s 25-year-old daughter.

Leon, who is a model, wore one of the boldest looks on the runway: a form-fitting bodysuit dripping in gold chains. The black suit was covered in a gold half moon pattern and covered the hands and feet as well. The shoe portion of the suit featured a pointed toe and a heel, and blended perfectly with the rest of the ensemble.

Perhaps the most striking details of the entire look was the gold chains. The neck featured a wide, chunky choker that was emblazoned with “Marine.” From there, six chunky gold chains cascaded down the chest to create the look of an entire neckline encrusted in gold. The longest chain even had a moon that corresponded with the pattern on the suit. Don’t worry, the chains don’t stop there. Leon also wore chained belts that started at her waist and ended at her hips. One of the chains featured dangling letters that spelled out “SOUL” in honor of the collection’s name. Leon’s wrists were also dripping in gold chains.

Leon wore her long hair straight and parted in the middle, which is her usual look. Her eyeliner was shaped into a slight cat eye, which was super fitting considering the rest of the look.