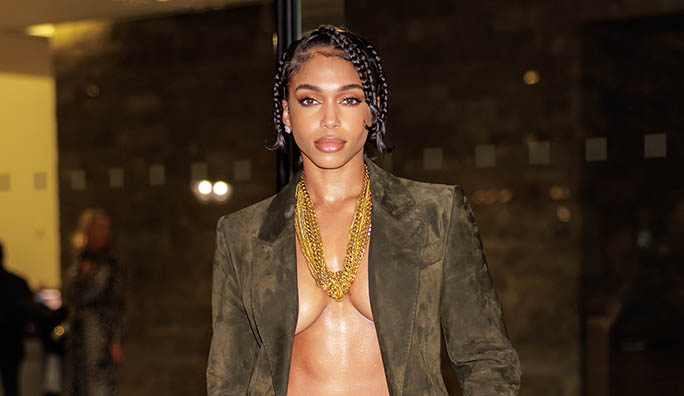 Lori Harvey took the traditional power suit to new levels while attending the Tom Ford Spring/Summer 2023 runway show in New York City last night. The eponymous label closed out New York Fashion Week with a bang. The brand’s new line was an explosion of leather, lurex, and sequins along with thigh-high splits and risky cutouts.

Harvey made a striking style statement at the highly-anticipated affair. The model and skincare entrepreneur’s look garnered much attention as she arrived in a velvet pantsuit. Her ensemble consisted of a sharp forest green blazer that had slightly pointed shoulders, sleek lapels, and side slant pockets.

Harvey updated the signature style staple by deciding to go braless underneath her jacket. She completed the look with olive green low-rise trousers that sat perfectly on the hips.

The SKN by LH founder styled her short tresses in a series of small braids. For accessories, Harvey went with knotted gold chains and a small sequin studded clutch.

The style maven rounded out her look with Tom Ford’s Velvet Disco Platform Sandal. The sensational silhouette is lined with leather and features a stacked platform with a clessidra shape heel.