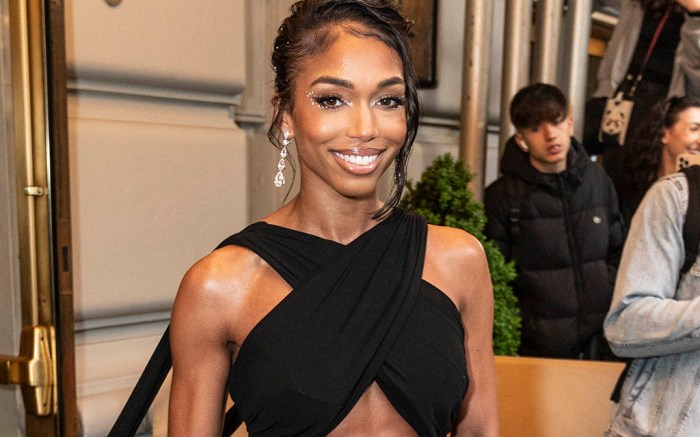 Lori Harvey brought elegance to the 2022 Met Gala on Monday in New York in an all-black look. She was seen exiting The Pierre Hotel to make her way to the big event.

The model set herself apart from all the glitz and glam of the night by opting for a dress by Michael Kors Collection with a subdued color, but had eye-catching construction.

The star stood tall in a black crisscrossed bodice that hung over her shoulders and laid over her back much like a scarf. The bodice transitioned into a diamond cutout, showing off the star’s mid-drift, dipping into a V shape. The skirt on the dress is lengthy, flowing into a long train that followed behind as she walked.

Harvey decorated each finger with silver bling, while her ears were occupied with dangling silver. The star’s hair was kept up and out of her face in a quaffed bun and her makeup was neutral, finished off with a nude lip.

The look is another take on American fashion, featuring simplistic and glamorous touches that made the dress feel like more than a piece of clothing, but a complete ensemble. While her shoes were hidden under the skirt’s hem, Harvey likely coordinated with a black sandal or pump.