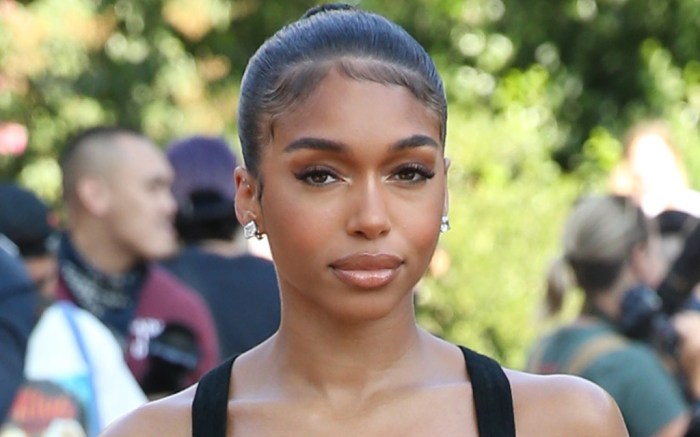 Lori Harvey made a sleek style statement while celebrating her close friend and the vice president of her enterprises, Tré Thomas’ birthday on Thursday. The 25-year-old model and GymShark ambassador enjoyed the night out with her friends and fashion influencers Taina Williams and Amaya Colon.

The trio uploaded several videos from the fun festivities on social media. In a post shared by Williams, Colon shakes and shimmies from side to side as she jokes about being the only one who never gets drunk at events. The recording eventually cuts to Harvey and Williams doing the same dance and admitting that they have no problem indulging. Set to an original sound by Marleigh Jack & Chris, the trending TikTok audio track and dance has been reimagined by more than 100,000 TikTok users.

Harvey looked breathtaking for the eventful evening. The SKN by LH founder wore a long-sleeve black mini dress that included a risky asymmetrical cutout on the bust. The garment also had pointy shoulder pads, ruched detailing and a draped fabric overlay that hung from the hem. The media personality slicked her hair back into a ponytail and complemented the ensemble with diamond stud earrings.

Although her footwear was not visible in the shot, other photos revealed that Harvey completed her look with one of her favorite go-to shoe styles, strappy stiletto sandals. She recently wore a similar pair of heels in her latest Instagram photo. The picture sees Harvey posing in a retro graphic T-shirt and metallic LaQuan Smith piece, which she repurposed into a skirt.

When it comes to fashion, Harvey has an ultra-chic sartorial sense that she continues to display at formal events, while traveling and when she hits the streets around LA. Her wardrobe is a mix of streetwear and athletic apparel. Harvey’s shoe style is equally as stylish, consisting of several Yeezy silhouettes, lace-up sandals and chunky boots. She has made a name for herself within the industry by starring in campaigns for Michael Kors, Valentino and Dolce & Gabbana. She has also partnered with Sephora and PrettyLittleThing.