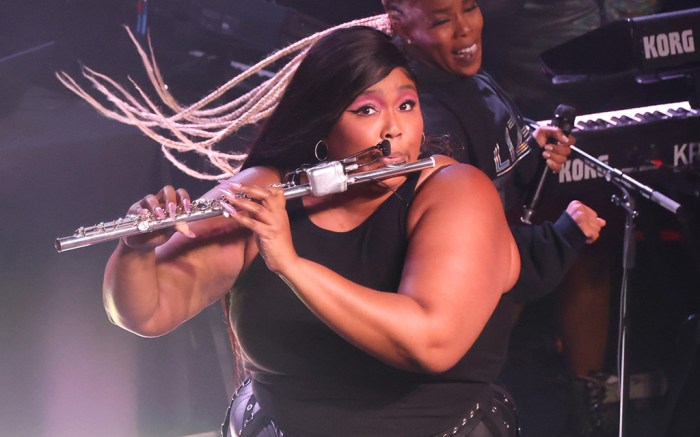 Lizzo graced the cover Vanity Fair’s November 2022 issue in full gothic glam, the musician trying out a new style in the colorful spread.

The “About Damn Time” songstress spoke to the publication about her busy career from touring around the world during her ongoing “The Special Tour,” to spilling the beans about her once private now public relationship with comedian and actor Myke Wright. Alongside the cover shoot, Lizzo took a hilarious lie-detector test on Vanity Fair’s YouTube channel.

“My job as someone who has a platform is to reshape history,” Lizzo told Vanity Fair, the Emmy Award-winner clad in a voluminous floor-length red tulle coat and see-through gloves from Act Nol. The flutist’s look featured punk meets glam rock accessories from brands like Yandy, Austin James Smith, and Cartier that offered the outfit that extra edge. The crimson ensemble wasn’t complete without sky-high lace-up platform Pleasers with a glossy finish.

The second look saw Lizzo wearing an avant-garde dress by Bad Binch Tongtong fitted with little legs that jutted out of the bottom that made the pop singer look like a spider. Along with the sculptured garment, the Michigan native was styled in vinyl platform boots by Harry Halim, shiny black Atsuko Kudo opera gloves, and a veiled Ilariusss headpiece that shrouded her face.

Arachnids aside, among other recent career highlights, the star mentioned getting to play James Madison’s crystal-embellished flute while stopped in Washington D.C. during her tour. “When people look back at the crystal flute, they’re going to see me playing it,” said Lizzo.

A third look had Lizzo going full-on grunge, the star dressed in a BDSM-inspired lace-up Luis De Javier body-con dress and latex Tableaux Vivants gloves. The Grammy Award-winner’s hair was set in tight wet curls styled in a shaggy mullet that gave Lizzo the rocker-chic energy she was born to serve.