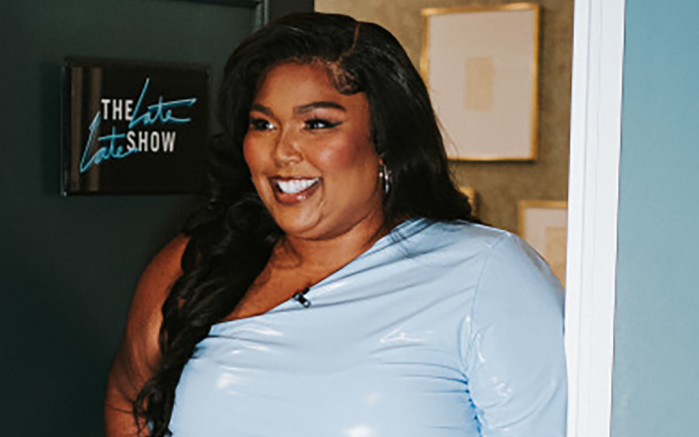 Lizzo sets the mood for her upcoming album while wearing an electrifying look on Monday for an appearance on “The Late Show with James Corden” in Los Angeles.

For the outfit, Lizzo went with an electric blue one-shoulder dress that featured a puffy sleeve that takes a nod at current trends. The dress had a slick appearance with a latex feel and came down to her calves.

To finish off everything, Lizzo went with white ankle boots for an interesting pop of contrast. The shoes were pointy and had a pyramid-shaped heel height of approximately 3 inches for a unifying boost.

The “Truth Hurts” singer was there to talk about her new album that will be releasing soon, and she even let Corden play a snippet of her “top secret” track, which will be released April 14. She also played a game called ’80s v Today Dance Bop Riff-Off,’ where she sang current songs and Corden battled her while singing songs from the ‘80s.

The other guest for the evening was Gabrielle Union, who was there to promote her new film “Cheaper by the Dozen,” which released on March 17.

Lizzo is a style chameleon who often delivers expected outfits. In fact, she recently wore an all-black athleisure ensemble with matching furry sandals to celebrate finishing her album. Also, she wore a rainbow outfit with matching boots for SXSW for a look that displays her affinity for color.

Flip through the gallery to see Lizzo’s style evolution.