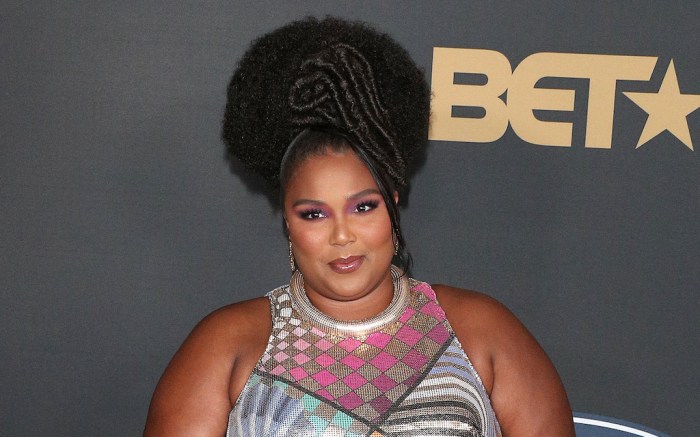 Lizzo sparkles in blue for her new sera. The “Juice” singer released her new single alongside a music video entitled “About Damn Time,” where the flutist and pop star dazzled in her typical funny splendor.

For the first outfit, Lizzo went with a gray sweatsuit comprised of a slouchy hoodie and equally as relaxed jogger sweats.

She then transformed and wore a blue catsuit that featured dramatic cutouts and was covered in matching sequins. The garment was sleeveless, but Lizzo accessorized it with a pair of matching fingerless arm warmers.

Lizzo wore two pairs of shoes in the music video: white crocs clogs and white reptilian embossed combat boots. The boots came up to her calves and had matching hardware.

Lizzo is known for her daring and stylish clothing taste. For example, she recently went monochrome in a cropped orange leather jacket, a mock neck top and matching flared trousers coordinated with chunky white sneakers while leaving a Saturday Night Live dinner. She also wore an electric blue off-the-shoulder latex dress paired with white booties while attending “The Late Show with James Corden” for a sleek look.

While on red carpets, she tends to wear creations from brands like Versace, Marc Jacobs and Christopher John Rogers.

The “Truth Hurts” singer has also ventured into the fashion industry, having starred in campaigns for the Australian eyewear brand Quay. And she appeared in a cosmetics campaign for Urban Decay in 2020.