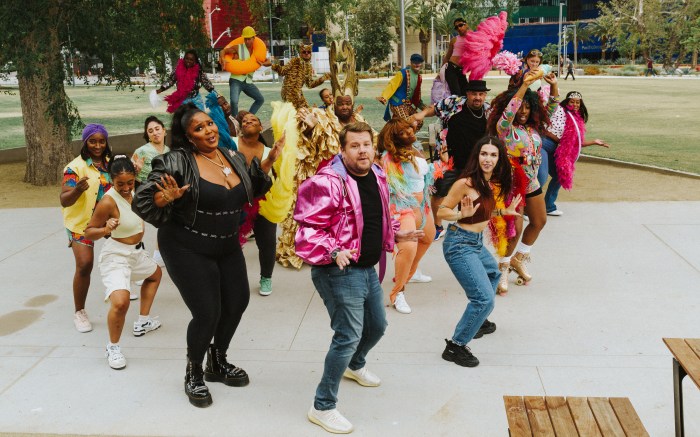 Lizzo got the famed Carpool Karaoke treatment on the most recent episode of “The Late Late Show with James Corden.” To take on the fan-favorite segment, which aired last night, the 34-year-old singer and rapper dressed in her own shapewear and athleisure brand Yitty while singing and dancing to her hit songs.

For the late show appearance, Lizzo wore black Yitty leggings paired with a black Yitty top featuring a branded strip across the middle. It’s not clear if the top is a Yitty bralette layered over black shapewear or if it’s a one-piece design. Lizzo also wore a black cropped faux leather hooded jacket with the outfit, which featured a bedazzled Yitty logo on the back and front. The jacket also featured voluminous elastic-hemmed sleeves.

Lizzo wore the outfit with black patent Doc Martens boots featuring a silver double chain detail across the toe. She accessorized the look with a gold Yitty chain, gold hoop earrings, and a gold watch. The star wore her hair in a high wavy ponytail, wearing her signature heavy-lashed glam makeup look.

Lizzo launched her size-inclusive shapewear brand called Yitty on April 12. The brand, which includes undergarments and casual athleisure pieces, is a sister brand to Fabletics.

During the Carpool Karaoke segment, Lizzo taught James Corden the viral TikTok dance to her song “About Damn Time,” enlisting an entourage of dancers to help out. That entourage included the creator of the dance, Jaeden Gomez, who later posted a video of the duo dancing to the song on her TikTok.

with the queen herself..✨🪩so thankful to be able to do my dance on the @latelateshow TONIGHT w/ @lizzo ⭐️

The star also revealed the meaning behind her name and played the flute for Corden. Lizzo’s new album “Special,” which features the song “About Damn Time,” is set to release on July 15.

See More of Lizzo’s Style Evolution Through the Years