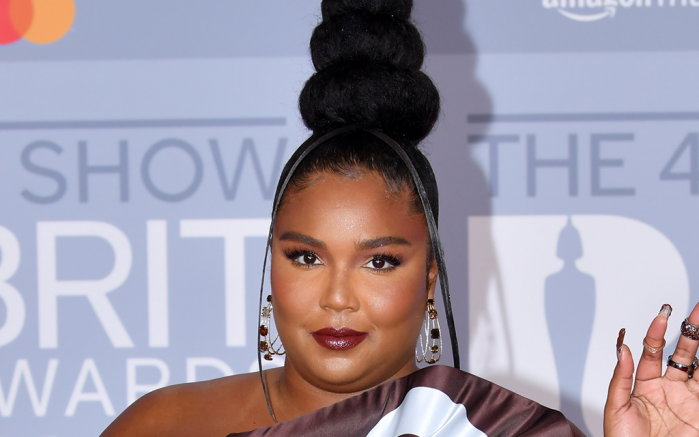 With Y2K styles still being worn and reinvented in realtime, Lizzo takes a stab at two of the decade’s most popular silhouettes: the jersey dress and Nike’s Air Force 1 sneaker.

In a photoset shared on Instagram Monday, the “Rumors” singer posted a few glimpses of her being a “Baby Phat mami” while wearing an ensemble inspired by the early aughts.

Outfit-wise, she wore a pink Baby Phat basketball jersey that featured the brand’s name etched in baby blue and white with trim matching around her neck and arms. The bottom of the garment had a sleek tie at the hemline, and it also had Baby Phat’s famous kitty on the front in matching blue.

Lizzo’s accessories followed suit with her throwback theme including a pair of diamond-encrusted hoop earrings and brown translucent square-shaped sunglasses. Also, she carried a white Louis Vuitton Monogram Multicolore Pochette bag that was a staple within the early ‘00s.

To ground everything, she threw on a pair of crisp white high-top Nike Air Force 1 sneakers that were another popular mainstay from the era. The shoes get characterized by their sleek round-toe appearance and the velcro strap at the top of the footwear. The shoe has taken over the streets, and TikTok feeds alike for their versatility. The sneakers come in a low-top, mid-top and high-top version and have gotten new looks from designers and brands like Virgil Abloh, Serena Williams and LeBron James. Some of the celebrities that have worn the style include Gigi Hadid, Naomi Osaka and Simone Biles.

When it comes to her clothing tastes, she tends to fancy modern and trendy garments. For example, she recently wore a rainbow-themed outfit paired with matching boots during SXSW for a fun, punchy ensemble that showcased her affinity for color and prints.

The “Truth Hurts” singer has also ventured into the fashion industry, having starred in campaigns for the Australian eyewear brand Quay. And she appeared in a cosmetics campaign for Urban Decay in 2020.

Pop on a pair of white sneakers for a streamlined finish.