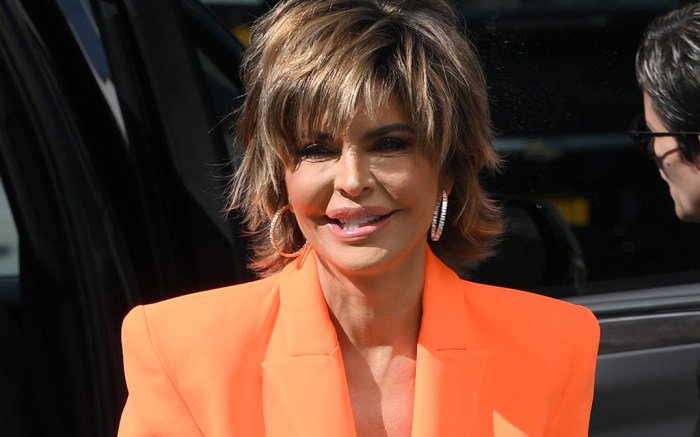 Lisa Rinna served a special look for her fans at BravoCon 2022. The “Real Housewives of Beverly Hills” star arrived at the Javits Center in New York City today in a neon orange ensemble with coordinating footwear and her classic hairstyle.

Rinna’s look evoked a popular meme that has been making the rounds on social media. The images are from an M&M’s ad for the 2008 Oscars that featured the socialite’s face on an M&M wearing pointed-toe heels.

The “Days of our Lives” actress dressed in a fitted suit consisting of a double-breasted tailored blazer jacket and pleated trousers. Rinna carried a metallic gilded clutch and wore large gold hoops to match.

Speaking of heels, the “Real Housewives Of Beverly Hills” star wore sharp pointed-toe shoes in a similar hue to her suit made of a clear vinyl that gave the footwear an added edge. Accompanied by 3 to 4-inch block heels, the shoes offered the 59-year-old a boost in height, if only slightly.

When it comes to footwear, Rinna often opts for sleek and statement-making styles. The “Vanished” actress often wears pointed-toe pumps, boots, and stiletto-heeled sandals for a range of occasions, hailing from top brands including Tom Ford, Versace and Saint Laurent. When off-duty, she can also be spotted in low and high-top sneakers by Gucci, Adidas and Y-3, as well as Nike slides.

BravoCon is a 3-day event designed for the Bravosphere, where Bravoholics can come together to celebrate their fandom, while also sipping the hottest Bravolebrity tea.