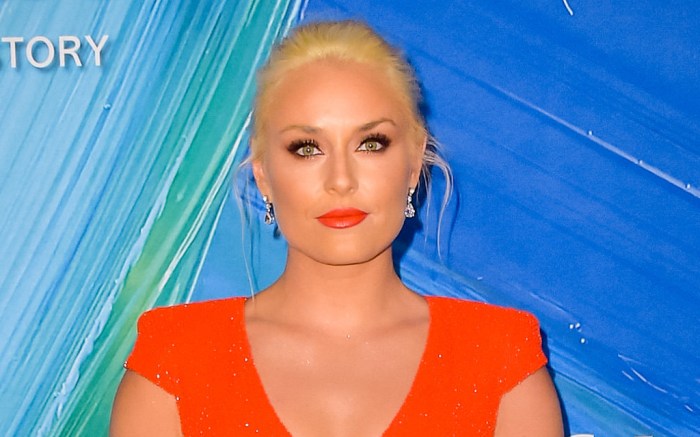 The Olympic gold medalist revels in the start of the Beijing 2022 Winter Olympics by sharing some exciting news with her fans on Instagram Friday.

In the caption, Vonn wrote, “Let the Games begin!! Excited for my new role with @nbc for the @olympics….And of course I’m supporting @teamusa with some red, white and blue! Good luck to all the athletes”

When it comes to the outfit, The new NBC Winter Olympics correspondent wore a red velvet suit from Gucci that featured sharp shoulders and flared leg pants that provided a polished finish. The suit jacket had two front pockets that added dimension to the garment. Underneath, she opted for a blue button-up shirt that added some contrast. She accessorized with a dainty silver necklace and a host of other shiny pieces.

To complete everything, Vonn slipped her feet into a pair of point red pumps that incorporated a suede upper with a slick, shiny toe cap.

For Vonn’s personal style, she has displayed a trendy and casual aesthetic that places a focus on clothes that are functional yet fashionable. For example, during the promo tour for her memoir, “Rise,” she wore a blue skirt suit that showed off her affinity for bold colors, and she has also worn a zipped jumpsuit and snow boots for a sporty getup.

Vonn has also made a name for herself in fashion, having starred in campaigns for Under Armour and Thom Browne.

Recently, in our January issue, Vonn spoke exclusively with FN about how shooting her fall campaign with the American fashion house Thom Browne was a first. “Shooting for Thom Browne was insane. I would say it was pretty cold and I was skiing in trousers and a skirt,” she recalled. “You know, I had never worn a skirt skiing before, but that was kind of a classic trend back in the day, when people were skiing on wooden skis. I mean, that was like a long time ago. But it’s retro, very cool, very chic.”

Put on a pair of red pointy pumps for a striking look.