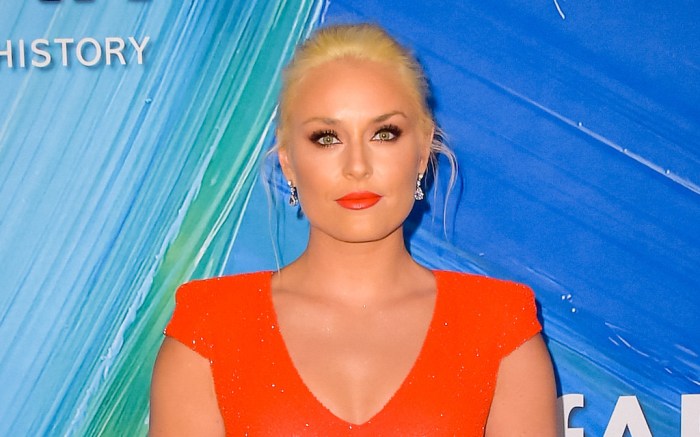 For the big night, Vonn wore a wholly unique oversized suit in a stunning mirrored material. In a video Vonn posted of her look on Instagram, the athlete’s high-waisted pleated pants billowed beautifully in the wind with mesmerizing movement. The 37-year-old wore her sparkling suit jacket open, pairing the look with a nude form-fitting cami underneath.

The Under Armour collaborator finished the look with sky-high nude stiletto pumps, wearing her blond hair down with a sleek side part and favoring a subtle makeup look to keep attention on her outfit.

The disco ball suit, which was custom-made by Georgian womenswear brand Anouki, even captured the attention of fellow Olympic athlete Aly Raisman, who is known for her own standout red carpet style.

“I want this outfit,” the gymnast commented on Vonn’s post.

The recent show marked Vonn’s first time hosting the international sports awards night. Vonn, who retired from skiing in 2019, received the prestigious Laureus Spirit of Sport Award that same year to mark the end of her skiing career. In 2021, she became a member of the Laureus Academy, a group of 71 elite former athletes who act as the voting power for the Laureus World Sports Awards.

“I know how emotional and uplifting it is to receive a Laureus Award and it’s going to be so exciting to be part of the Awards Show in Seville,” Vonn said in a statement prior to the virtual event.

Though Vonn is best known for her time with the U.S. Ski Team and her four World Cup championship titles, she has also dabbled in the style realm, most notably partnering with Under Armour on a line of outdoor performance gear. The retired skier also released a winter sportswear line with Head, the ski brand she was sponsored by during her prolific career. Vonn also has her hand in high fashion, modeling designer Thom Browne’s FW 2021 collection in a fashion film that featured her skiing down the slopes in couture.

See more of Vonn’s style through the years.