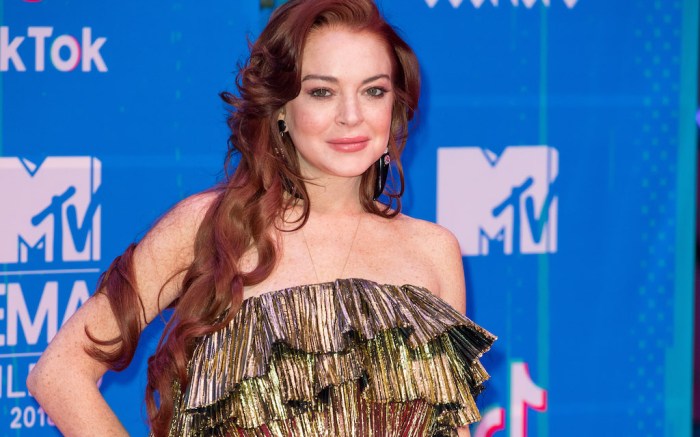 Lindsay Lohan gets physical in her new Super Bowl commercial for Planet Fitness. The actress stars in the newest Planet Fitness ad, where she takes small digs at some of her scandals from the early aughts.

This will be the first time the fitness chain has aired a commercial during football’s biggest night.

The ad starts with Lohan running on a treadmill and the question of the moment gets asked, “What’s gotten into Lindsay?” Lohan does a variety of things in the funny campaign such as playing against Dennis Rodman on a skit of Jeopardy, trading DUI’s for DIYs with Danny Trejo and making paparazzi cry, to name a few. The commercial also features the help of William Shatner.

For the outfit in the commercial, Lohan wore monochromatic activewear and a pair of bright orange sneakers that added a bright pop of color to the ensemble.

The commercial slated to air during the third quarter of NBC’s broadcast of Super Bowl LVI.

Planet Fitness is a part of the growing Rolodex of advertisers for this year’s Super Bowl. NBC indicated that more than 30 new advertisers have bought airtime in the Super Bowl, which represents about 40% of the total advertisers in the event, and the news corporation has also gone on record stating that it’s fetching $7 million for several 30-second spots.

Click through the gallery to see Lohan’s party style evolution.