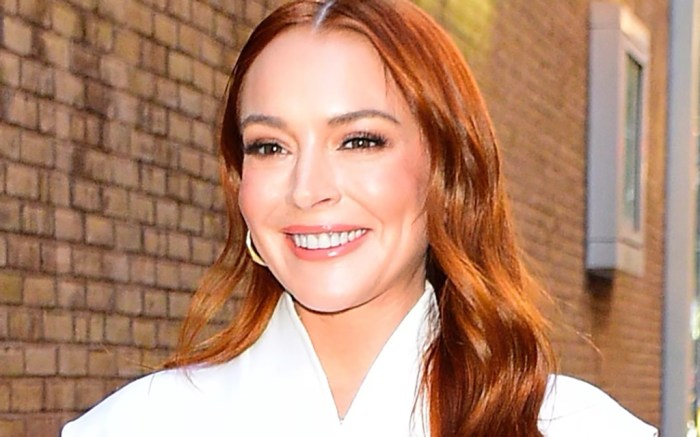 Lindsay Lohan donned a Michael Kors ensemble to stop by on “Live with Kelly and Ryan” yesterday. The actress, who is currently promoting her new Netflix film “Falling for Christmas,” was photographed in front of the ABC studios in New York after taping an exclusive interview.

The “Rumors” songstress was clad in a white double-faced sleeveless wrap jacket which she cinched with a thin gold belt. On bottom, the actress opted for an elliptical skirt with a sharp side slit.

Lohan stepped into gold metallic sandals to complete her look. The style featured intersecting straps across the tops of her feet and two more around her ankles, securing them in place. Taking her higher, the New York native’s footwear choice was also equipped with 3 to 4-inch stiletto heels.

When it comes to shoes, Lohan’s styles run the gamut between edgy and bohemian. The multi-hyphenate is known for wearing studded, metallic and sharp strappy sandals and pumps on the red carpet, hailing from top brands including Giuseppe Zanotti, Christian Louboutin and Valentino. Her off-duty styles encompass similarly statement-making pairs, including thigh-high and ankle boots by Prada, Saint Laurent, Givenchy and Louis Vuitton.

Lohan has been a reigning figure in fashion as an early 2000’s pop culture fixture, as well as a Fashion Month regular and campaign star for Miu Miu, Fornarina and Dooney & Bourke over the years. This year, she’s also starred in an Allbirds campaign for the brand’s sustainable Tree Flyer sneakers.