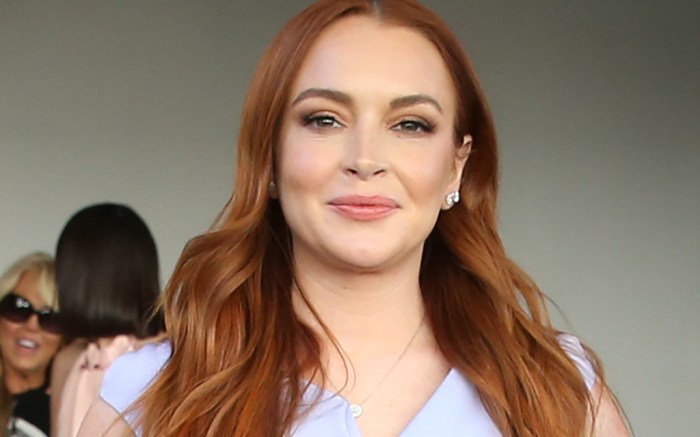 Lindsay Lohan recorded an interview for “The Drew Barrymore Show” in New York today. The actress, who is currently promoting her new film ” Falling for Christmas,” was photographed leaving the CBS studios today alongside her sister Ali Lohan.

Lohan went lavender. Her midi-length cocktail dress consisted of an asymmetrical Peter Pan collar attached to a hidden bodice and short sleeves. She strung on a dainty pendant necklace along with diamond studs and adorned a few fingers with chunky rings for a little extra sparkle.

On her feet, the “Mean Girls” actress opted for white pointed-toe pumps. The pair featured thin heels, around 3 to 4 inches, triangular toes, and a sturdy construction that offered the former Disney star a more comfortable experience.

The shoe style is a classic beloved by many celebrities on and off the red carpet, including Lohan, for their versatility and timeless silhouette. Often worn with short or mid-length dresses, the footwear is a sharp addition to any ensemble.

When it comes to shoes, Lohan’s styles run the gamut between edgy and bohemian. The multi-hyphenate is known for wearing studded, metallic and sharp strappy sandals and pumps on the red carpet, hailing from top brands including Giuseppe Zanotti, Christian Louboutin and Valentino. Her off-duty styles encompass similarly statement-making pairs, including thigh-high and ankle boots by Prada, Saint Laurent, Givenchy and Louis Vuitton.

Lohan has been a reigning figure in fashion as an early 2000’s pop culture fixture, as well as a Fashion Month regular and campaign star for Miu Miu, Fornarina and Dooney & Bourke over the years. This year, she’s also starred in an Allbirds campaign for the brand’s sustainable Tree Flyer sneakers.