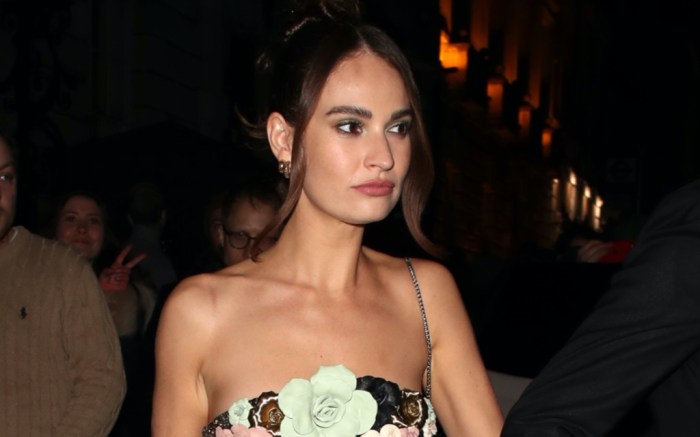 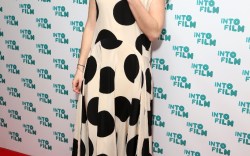 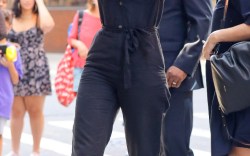 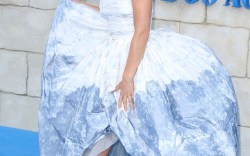 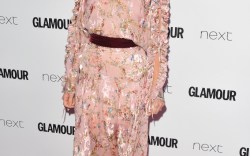 Lily James was ready for spring in her latest look.

The “Pam and Tommy” star hit the British Vogue And Tiffany & Co. Celebrate Fashion and Film Party on Sunday night. The event followed the BAFTAs, which were also held in London. To the after-party, James donned a mini dress from Roberto Cavalli. The navy blue dress was covered in mint green and blush pink florals, with a few 3D flowers at the top of the strapless neckline. James wore her hair up and added small earrings to the look, but otherwise let her dress and boots take center stage.

James kept the botanical theme going with her shoes. The “Mamma Mia! Here We Go Again” actress wore mint green thigh-high boots with her dress. The boots, also from Roberto Cavilli, brought out the shades of green in her dress. The boots were also adorned in flower embellishments and included a pointed toe and a thin heel reaching roughly three inches in height.

Last week, James hit the red carpet for the finale of “Pam & Tommy” in another chic look from Roberto Cavalli. She wore a see-through gold sequined dress that was accompanied by a matching harness that buckled around her neck and midsection. She added a pair of Jimmy Choo’s Max platform heels to the ensemble. The popular choice has been worn by celebrities like Gabrielle Union-Wade and Megan Fox.

Click here to see more of James’ best outfits through the years.