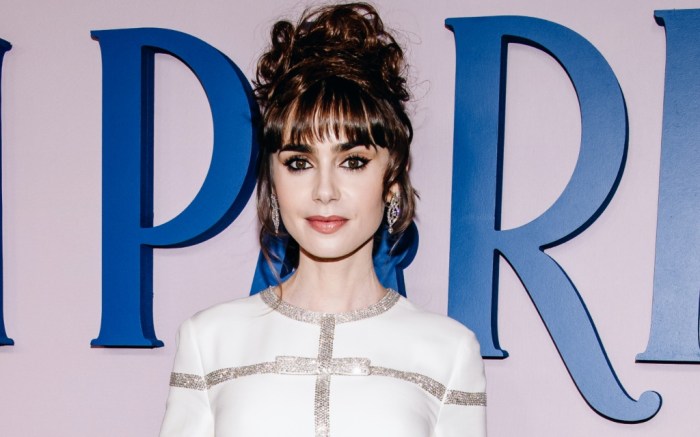 The actress hit the red carpet premiere for “Emily in Paris” season 3 on Thursday night. The New York City premiere was held at the French Consulate and several of her costars, like Ashley Park, Lucas Bravo, Camille Razat and more joined Collins at the event. The new season hits Netflix on Dec. 21.

Collins, who plays Emily in the popular romance series, donned a white long sleeve mini dress from Valentino. Her dress featured silver sparkly bows and stripes. She added even more glitz to the look with drop earrings and a few rings. Collins added a bit of warmth with a pair of black sheer tights.

The “To the Bone” star added a pair of sky-high shoes to complete the look. She wore platforms heels covered in silver rhinestones, with a thick heel that reach at least 6 inches. The shoes featured a rounded toe and a thin ankle strap.

Collins talked about her favorite shoes from the third season of ‘Emily in Paris” while at the premiere.

“There’s this pair [of Christian Louboutins] that are glittery and very bold that I wear at the Pierre Cadault retrospective with this Dolce & Gabbana black and white shouldered shirt with micro shorts,” Collins said to FN.

She also talked about how the fashion in season 3 is different from earlier styling throughout the series.

“It’s more, more, more,” Collins said. “The fashion, it’s bolder, brighter, also a bit more quietly confident and chic for Emily. There’s a Frenchness to her this season that is shown in her hairstyle, in her fashion, in the language, so I’m excited to get to wear new designers and vintage couture and archive pieces.”

Collins’ shoe style is often both whimsical and chic. The “Love, Rosie” star often hits the red carpet in platform heels like the ones she wore to “GMA,” as well as boots and pointed-toe pumps, hailing from top brands including Valentino, Celine and Christian Louboutin. Her off-duty looks typically incorporate sharp comfortable shoes, ranging from Birdies slippers to Gucci loafers. She’s also been spotted in Nike, Lacoste and Sorel sneakers.

PHOTOS: Click through the gallery to discover Collins’ style evolution over the years.