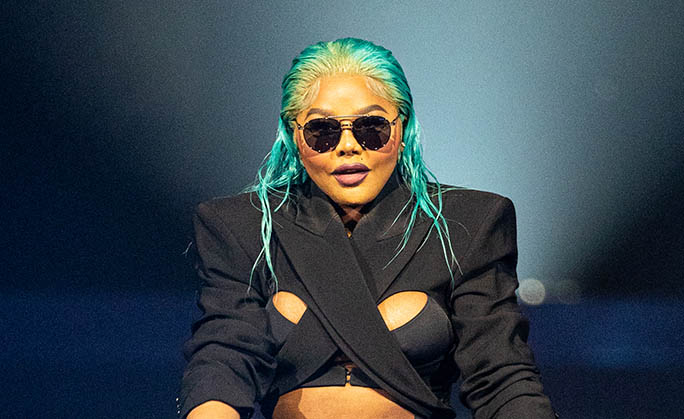 Lil’ Kim is the new face of Mackage. For its fall 2022 collection, the label introduced the hip-hop icon as the campaign’s front woman.

Eran Elfassy’s Mackage brand has steadily become a pioneer within the outerwear industry – harnessing unique takes on down coats and jackets with a sustainable focus and stylish performance protection. The line seeks to bolster a ready-to-wear offering that will pair well with its wide range of men’s and women’s parkas, snow gear, seasonal coats, jackets, and accessories.

The freshly released campaign imagery sees the award-winning rapper striking a model-worthy pose in a brown-and-white Mackage Kym Double-Knit Monogram Jumpsuit. The form-fitting garment is a sleek winter staple as it includes a front center zipper, rib knit collars and cuffs on the hem to add warmth.

Completing Lil’ Kim’s look was a towering set of platform boots. The silhouette easily took her ensemble to new heights as it featured a 9-inch outsole and fuzzy lining on the upper. The platform shoe trend is one of the easiest styles to incorporate into any wardrobe. Post-pandemic, platform shoes have emerged as one of the most popular footwear styles. The dramatic heel easily adds flair to any outfit.

Mackage was founded in the 1990s but rose to prominence in the early 2000s. The brand revisited its origin story by bringing in Lil’ Kim, who also launched her career in the 1990s. Lil’ Kim is known to make daring statements and Mackage’s new monogram line is certainly bold — making it a perfect match.

Along with her latest role in Mackage’s campaign, Lil’ Kim has also starred in campaigns for brands like Old Navy and Iceberg. The emcee is beloved by many greats in the industry, and even Marc Jacobs cited Lil Kim as a muse in the mid-2000s. She has even walked runway shows for brands like Baby Phat and VFiles. The entertainer has also worked with PrettyLittleThing to create a capsule collection of trendy, modern pieces like a mesh bodycon dress and a patent trench coat.