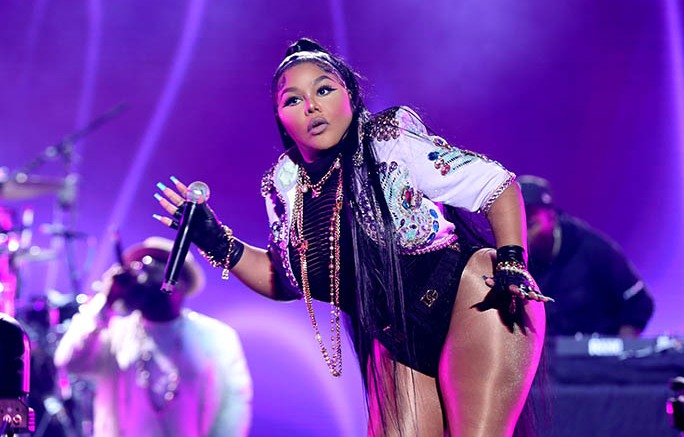 The 2022 Essence Festival of Culture returned to New Orleans with a host of unforgettable performances. The annual event provided music lovers with a cross-generational lineup of stars.

Lil’ Kim put on for hip hop heads as she hit the stage at the Caesars Superdome. The “Crush on You” rapper belted out some of her iconic hits in a bejeweled cropped jacket with a sheer black bodysuit. She complemented the one-piece garment with a Dolce & Gabbana belt that buckled at the center. Lil’ Kim amped up her look with a long gold chain necklace and fingerless leather gloves, which helped to show off her bright blue nails. She also added pearl bracelets and small stud earrings.

The New York legend styled her long lustrous locs half up, half down and opted for sharp winged eyeliner and a neutral matte pout. Lil’ Kim tied her look together with a pair of bedazzled knee-high boots. Other photos show that the silhouette was adorned with embellishments and had an elongated pointed-toe and sharp stiletto heel.

When it comes to Lil’ Kim’s essential style, she tends to fancy luxury brands like Louis Vuitton, Chanel and Valentino. On the footwear front, Lil’ Kim wears brands like Prada, Gucci and Fendi. The entertainer is known for being a fashion poster child, having starred in campaigns for brands like Old Navy and Iceberg. She is beloved by many greats in the industry, and even Marc Jacobs cited Lil Kim as a muse in the mid-2000s. She has even walked runway shows for brands like Baby Phat and VFiles. The emcee also worked with PrettyLittleThing to create a capsule collection of trendy, modern pieces like a mesh bodycon dress and patent trench coat.