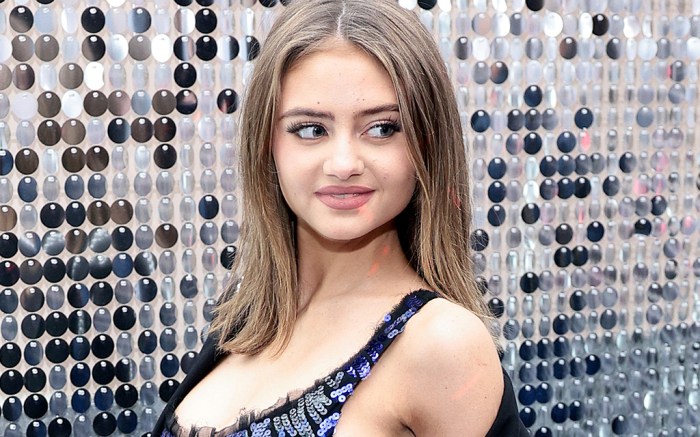 Leni Klum partied with Marc Jacobs at his Perfect Party at Hotel Chelsea in New York on Dec. 7. The social media personality and daughter of Heidi Klum made a stylish appearance clad in a vibrant blue sequin dress and quintessential black pumps.

Klum’s dress was made from of sequined fabric in a bodycon fit, featuring a black tulle trim and embellishments creating a floral design. Overtop the sparkling little number, Klum layered over a boxy blazer jacket in black which she kept open to spotlight her dress.

Sticking to the classics, Klum wore a pair of glossy black pointed-toe pumps to complete her outfit. The pair featured thin heels that gave Klum around a 3 to 4-inch boost, triangular toes, and a sturdy construction that offered the budding model a more comfortable experience. Pointed-toe pumps are a tried and true choice that many celebrities love for red carpet appearances and events; Klum included

Klum’s footwear choices often include pointed-toe pumps, ankle boots, and lace-up leg climbing sandals with the addition of crystal embellishments. When off-duty, the Dior makeup brand ambassador can usually be spotted in low top and platform sneakers from top brands like Adidas, Superga, and Fila.

As of late, Leni has been flexing her modeling genes. The star participated in a PJ party photoshoot alongside her mother Heidi Klum for Intimissimi’s most recent campaign. The mother and daughter duo wore the same outfit, consisting of a red silk long-sleeve button-down top and matching red pants.