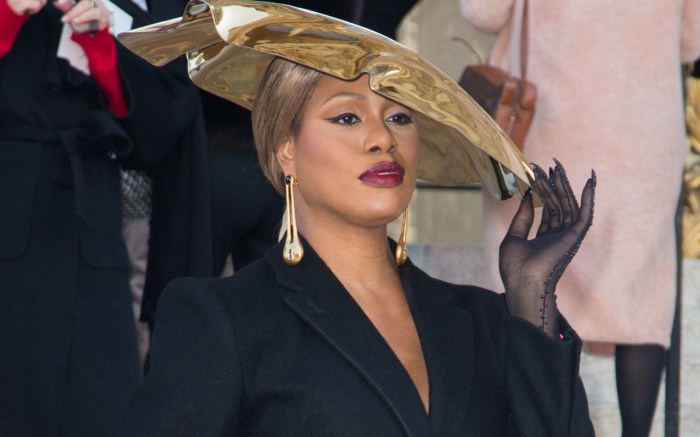 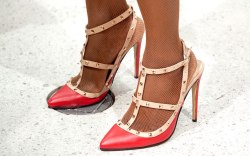 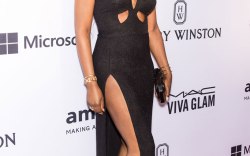 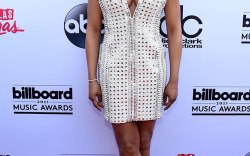 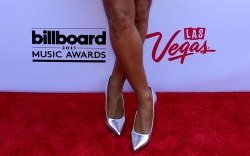 While arriving to take in creative director Daniel Roseberry’s newest designs, Cox stepped out in a dramatic Schiaparelli ensemble. The “Orange is the New Black” star wore a black long-sleeved coat with a plunging neckline, accented with chunky gold locks and lined in hot pink—two of Schiaparelli’s signatures. The surrealist outerwear was paired with sheer black gloves and an equally dramatic metallic gold hat, which perched at an angle on Fox’s head. The actress’ ensemble was complete with sleek black trousers, as well as a fan-shaped leather handbag and massive gold statement earrings.

As captured in her latest Instagram Reel, Fox twirled, posed and waved for paparazzi in pure diva fashion, soaking in her couture moment.

For footwear, the “Jolt” actress wore a matching set of sleek sandals. The black pair, which appeared to feature stretchy neoprene uppers, included a T-strap silhouette with large side cutouts. The pair gained a sultry edge from daring stiletto heels, totaling at least 4 inches in height.  Cox’s sandals gave her look a dynamic twist, added to its dramatic nature and cementing her couture debut as an undeniable success.

Strappy sandals like Cox’s are a year-round staple. Able to dress up outfits ranging from dresses to denim, similar pairs have grown in popularity from versatile hues and supportive ankle and toe straps. Trending styles also include studs, crystals and platform soles, as seen in new pairs by Kurt Geiger, Rebecca Minkoff and Schutz. In addition to Cox, stars like Charli D’Amelio, Brie Larson and Emily Alyn Lind have been spotted in sleek sandals by Steve Madden, Jimmy Choo and Stuart Weitzman in recent weeks.

The “Doubt” actress favors drama on the red carpet, as seen in flowing gowns she’s worn over the years by Naeem Khan, Marc Bouwer and Calvin Klein. She’s often seen in pointed-toe pumps by Christian Louboutin and Valentino on the red carpe, though she’s also known for wearing custom Kenneth Cole sandals. As a star in the fashion industry for nearly a decade, Cox has also become a front row favorite during Fashion Month, attending shows for brands like Christian Siriano, Prabal Gurung and The Blonds over the years.

Click through the gallery to see Cox’s shoe styles over the years.

Elevate your next look in sleek sandals.