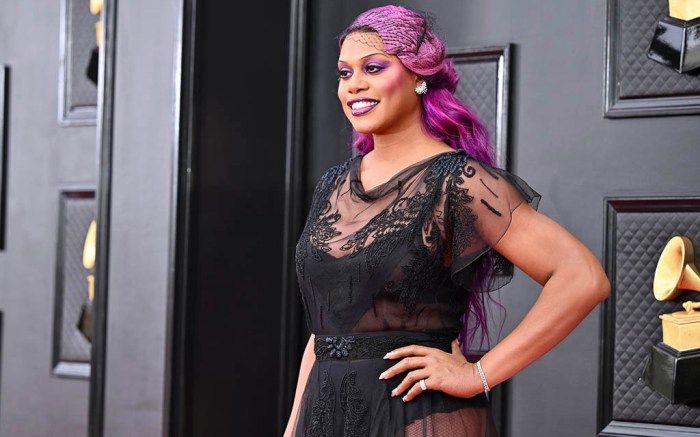 Laverne Cox was one of many stylish attendees of the 2022 Grammy Awards in Las Vegas tonight, and she had one of the more striking looks on the red carpet.

The “Orange Is the New Black” star is known for her dramatic outfits; both on and off the red carpet, and this night was no exception. Cox wore a black two-piece set from John Galliano’s fall 2007 collection that was layered underneath a sheer swatch of embroidered material and topped off the outfit with a simple, but elegant pair of ankle-strap heels.

The shoes featured a pointy profile, thin strap across the ankle and stiletto heel. Cox’s makeup perfectly complemented the gothic elegance of the ensemble. Her purple hair was swept back in romantic waves that were emphasized by a netted hairpiece, and the hue coordinated well with her eyeshadow, lipstick and blush. Overall, the look gave off Old Hollywood inspiration with a dark and funky twist vibes.

Cox has been a fashion darling for quite some time now, having become a front row favorite during Fashion Month and attending shows for brands like Prabal Gurung and The Blonds over the last few years. The “Inventing Anna” actress has sported gowns from a range of designers, including Naeem Khan, Calvin Klein and many more.