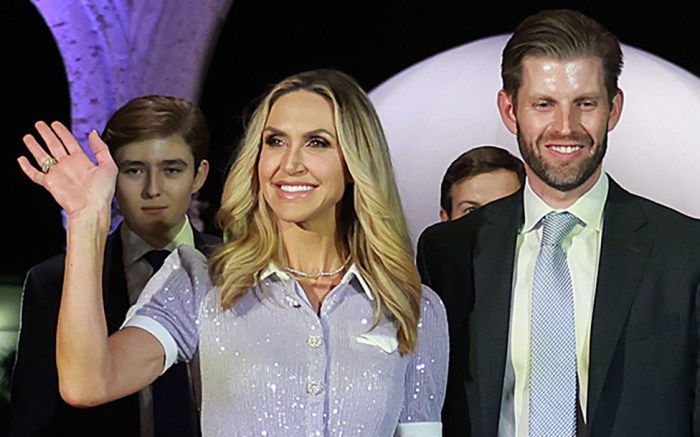 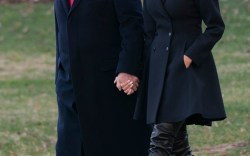 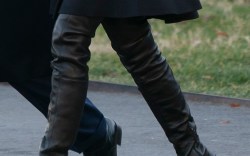 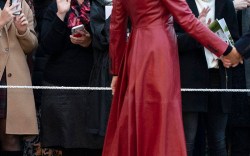 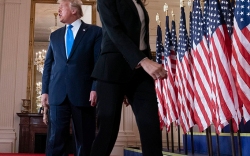 Lara Trump chose a sparkling dress for her father-in-law Donald Trump’s presidential announcement. The event happened yesterday night in Mar-a-Lago, Fla., as the former president announced his bid for re-election in 2024.

Lara wore a lavender mid-length dress with short sleeves and a collared neckline. The fabric used to make the garment was a shimmering pleated accordion-style trimmed with white. Flecks of silver speckled the dress that made the outfit shine. The former television producer’s outfit was belted, altering the silhouette ever so slightly.

On her feet, Lara opted for lavender pointed-toe pumps by Christian Louboutin. The pair featured thin heels, around 4.5 inches, triangular toes and sturdy construction. The shoe style is a classic silhouette beloved by many celebrities and public figures, including Melania on and off duty. She stood alongside her husband Eric Trump, who had on brown Oxford shoes with blue socks.

The Fox News contributor often wears leather and suede uppers in neutral hues, including beige and white. Similarly colored flat loafers and sandals from brands including Gucci are also regularly present in her rotation.

Also in attendance was Melania Trump who wore a blue and white polka dot dress with a high collar that transitioned into a white pencil skirt. The dress was belted, creating a cinched silhouette. She finished the outfit off with pointed white pumps.

PHOTOS: See all the shoes Melania Trump wore in 2020.