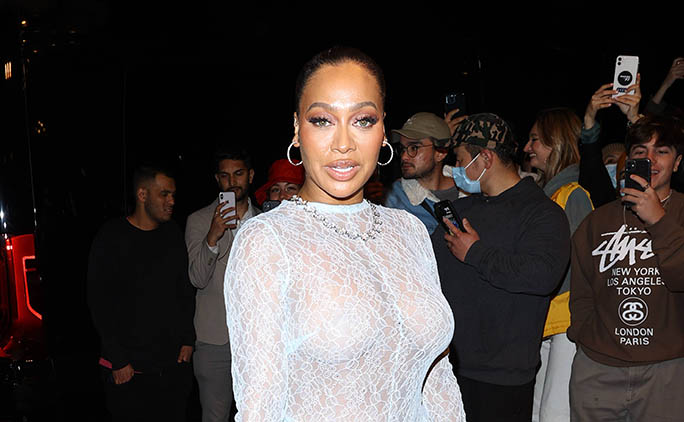 After stepping out in a head-turning ensemble to host Vogue’s Met Gala red carpet livestream, Lala Anthony pulled out another phenomenal outfit for fashion’s biggest night.

The actress and television personality was spotted making her way into the Ritz-Carlton Hotel in New York City on Tuesday. Anthony made a striking arrival in a light blue lace ensemble. Her outfit consisted of a long-sleeve see-through jumpsuit. The garment had a round neckline and small splits near the cuffs of the sleeves. The one-piece was complete with a matching skirt that wrapped around her waist and had a risky side slit.

To amp up the glamour, the “Power” alum accessorized with silver hoop earrings, a statement necklace and rectangle clutch. She styled her hair in a long ponytail and rounded things out with neutral makeup. Anthony took things up a notch by slipping into a pair pointy pumps by Jimmy Choo. The’s “Farley” heels had a sparkling triangular pointed-toe, PVC uppers, a strap near the heel for extra support and a small clear pyramid heel.

The 2022 Met Gala’s theme is “In America: An Anthology of Fashion,” exploring the foundations of American fashion — specifically, identifiers of American style and individual designers. The exhibit includes 100 garments by independent designers and dressmakers from the 1800s to the mid-late 1900s in the Museum’s American Wing period rooms. There will also be “freeze frames” of film vignettes in each room, highlighting the aesthetics of eight different film directors: Janicza Bravo, Sofia Coppola, Julie Dash, Tom Ford, Regina King, Martin Scorsese, Autumn de Wilde and Chloé Zhao. Supported by Instagram and Condé Nast, the event raises funding for The Costume Institute’s exhibitions and future improvements. The exhibit will be open to the public starting on May 7, and — along with Part 1, which opened last September — close on Sept. 5, 2022.